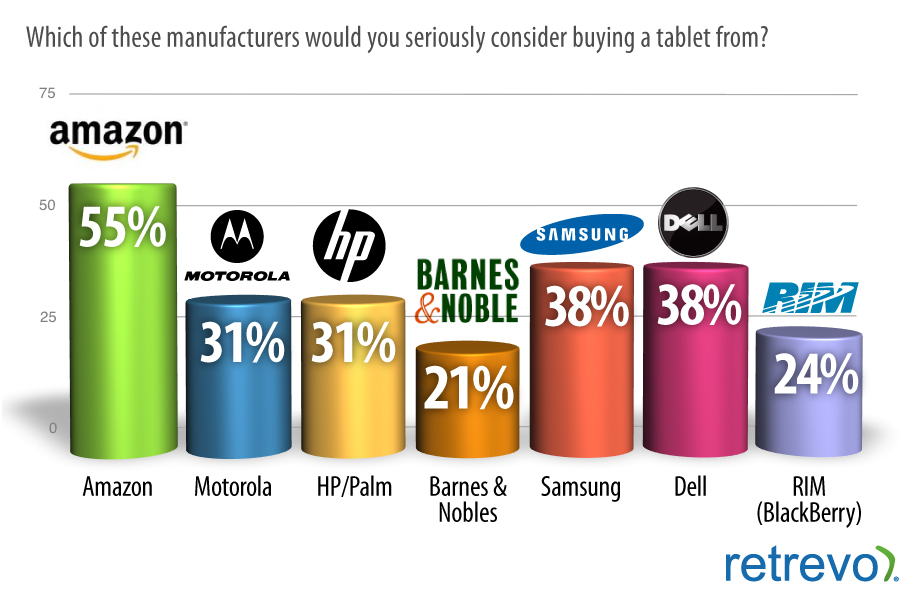 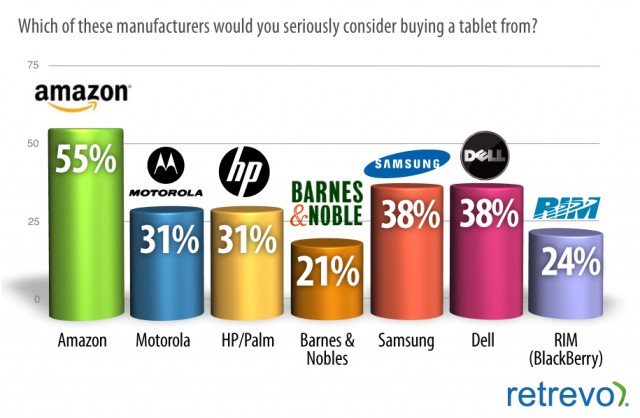 I wouldn’t go quite as far as Retrovo in saying that an Android tablet from Amazon is the biggest threat to the iPad, but it goes to show you that the public would definitely be interested in one. When looking at the survey results, 55% of those who responded said that they would seriously consider buying a tablet from Amazon.

Compare that to just 38% from Dell, 38% from Samsung, 31% from Motorola, 31% from HP, 24% from RIM, and 21% from Barnes and Noble. What’s crazy is that all of these other companies already have tablets out there, whereas Amazon is only rumored to be working on something. Not surprisingly, the iPad is still the tablet of choice for the general masses, but price would give Amazon a leg up.

If an Android tablet had similar features as the base model $499 iPad, 79% of people would for less than $250. The tipping point seems to be around the $300 price point, as that’s where 48% of people would choose the cheaper (Amazon) Android tab over Apple’s offering. Indeed, 48% of those who responded said that low price was the “most important” feature when buying their next tablet.

There are already some $300 tablets out there, but it’s not really until you get in the $399 range that you find suitable competitors like the Asus Eee Pad Transformer. If Amazon were able to get even less horsepower but at the $299 price point, it could have a real winner. The question is whether it would cannibalize sales of the Kindle.

Disclaimer: The source of the surveyed consumers is not known and whether or not they were Amazon customers or a study conducted on behalf of Amazon is also not known.