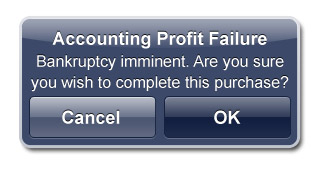 Gone are the days of in-app book and music purchases thanks to new rules from Apple. The scheme, which came into effect this month, deducts 30 per cent of each in-app sale – say, ebooks, mp3s or extra levels in game apps.  The decision has led Amazon, Kobo, Rhapsody and various other companies to remove the ability to shop from within their apps. And it drove ebookstore and reader app iFlow out of business.

The problem is that 30 per cent of each sale is as much or more than many companies take in commissions or profit. “The crux of the matter is that Apple is now requiring us, as well as all other ebook sellers, to give them 30% of the selling price of any ebook that we sell from our iOS app,” read a post on the iFlow blog prior to shutting their doors at the end of May. “Unfortunately, because of the ‘agency model’ that has been adopted by the largest publishers, our gross margin on ebooks after paying the wholesaler is less than 30%, which means that we would have to take a loss on all ebooks sold. This is not a sustainable business model.

“The key point here is that all sellers now get a 30% commission and Apple now wants a 30% fee, which is all of our gross margin and then some.”  Rhapsody agrees. The company’s president John Irwin claimed in February that “[adding] Apple’s 30% will exceed the revenue on our product…It’s not a matter of making less money, it would be zero profit.”  Last night, Kobo sent out a newsletter to its subscribers warning that their next update would remove the ability to shop from within their reader app, asking for any feedback to pass along to Apple. “In order to conform with new rules imposed by Apple,” read the newsletter, “our customers [will no longer have] the ability to shop from within our app.  “Please share your feedback on this latest change on our blog so that we may share with Apple or share directly with Apple at http://www.apple.com/contact/feedback.html.”

The general buzz? This decision has the potential to put every small ebook and music distributor on iOS out of business, and deter others from starting up at all. Electronic sales through app-embedded shops are no longer profitable for anyone except Apple.
What do you say? Should Apple drop the 30% in-app sales fee, lower it to say, 10 or 15% or keep it the way it is? Weigh in with your comment below.