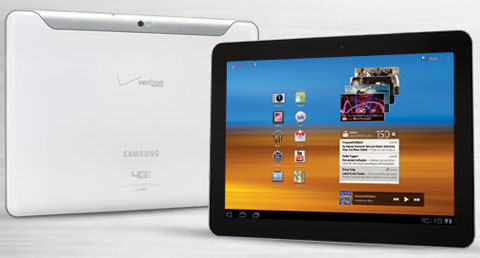 Are you digging the 10-inch variation on Samsung’s Android tablet, but you wish it had some faster wireless connection options? Wish no more, because the Samsung Galaxy Tab 10.1 with 4G is going to start arriving in stores on July 28. That’s tomorrow, in case you didn’t want to check your calendar.

Eric Franklin of CNET argued that the Samsung Galaxy Tab 10.1 is the best Android-based tablet on the market, ousting heavy competition like the Motorola XOOM and Asus Eee Pad Transformer. As a quick refresher, it gets the same 1GHz NVIDIA Tegra2 processor as its competitors, as well as the 10.1-inch capacitive touchscreen. The 4G model comes in your choice of Metallic Gray or Glossy White.

Preorders for the Galaxy Tab 10.1 4G already started last month with Verizon, so there’s no saying whether you’ll be able to just waltz into your local VZW dealer tomorrow to get one. The 16GB and 32GB models are $529.99 and $629.99 respectively, with 4G LTE plans starting at $30 per month for 2GB of bandwidth. At LTE speeds, you’ll likely rifle through that faster than you can say Honeycomb delight.