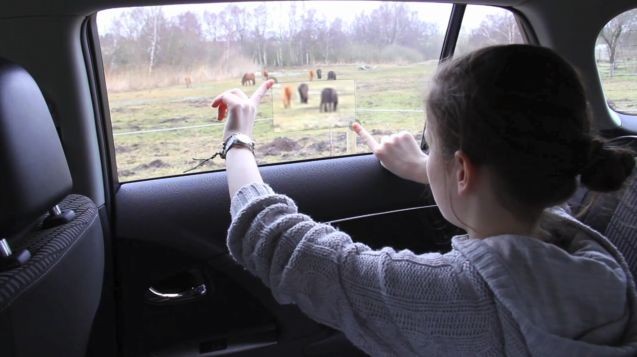 If you’ve ever been on a long road trip with kids in the backseat, you may have heard the familiar and annoying refrain of “I’m bored” or “are we there yet?” Car companies have tried to entice consumers that have whiny kids by installing headrest monitors in SUVs so kids can watch movies, but remember the good old days when your imagination got you through long car rides? Remember how drawing your initials and other doodles in the condensation on the inside of your window was a simple pastime?

Well, now a group of engineers and designers from Toyota Motor Europe’s Kansei1 Design Division and the consultancy arm of the Copenhagen Institute of Interaction Design (CIID) have decided to take car-window-doodling up a notch. They’ve designed a prototype system that would turn the side windows of Toyotas into touchscreen augmented reality devices. Using the “Window to the World” technology, kids could draw on the windows with their fingers and the image would stay there until the vehicle moved. At that point it would scroll off the window.

Another function of the technology is kids could use their fingers to zoom in on landmarks, and by using a distance function, they could get on-window read-outs of how far away the landmark is from the car.
Yet another function would let kids see and hear the words for selected objects. If your kid doesn’t know what a cow is, they would simply point at it on the window and the technology would display the word and a voice would read it out.

Although neither Kansei1 nor CIID have told us how the system actually works, two working prototypes have reportedly been built, and were on display last month at the “Our Future Mobility Now” exhibition in Brussels.
If your kid is easily amused by passing tumbleweeds and farm animals, this would be enough to keep them from whining incessently during your next road trip. The average kid might need something a little more engaging, like maybe a book. Remember those?

So, pointless technology or an interesting use of augmented reality?