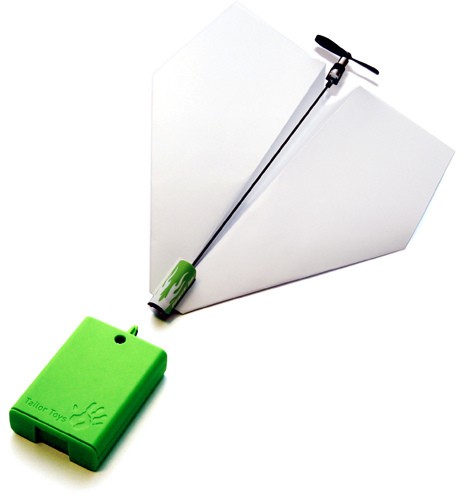 Remember building paper planes as a kid? How you’d release them in the air and try so hard to find the perfect balance in order to keep them up for as long as possible? But unfortunately, the planes would always crash before you could count to three. Well, if you want to relive that airborne dream, consider Tailor Toys’ Power Up electric power module for paper airplanes. The gadget provides an electric engine to the common paper plane.

The Power Up Toy kit consists of a capacitor, a propeller and a carbon fiber shaft that connects the two. The capacitor is on the front of the paper plane, while the propeller is on the back. A twenty second charge with three AA batteries is enough to power 90 seconds of flight. The time problem is solved and the lack of flight control could possibly be overcome with the Power Up motor.

The next add-on to this kit should be a remote, so users can easily control their plane instead of being forced to chase it. But until that remote comes, a little work-out won’t hurt. You can buy Power Up for $17.49 on Amazon.