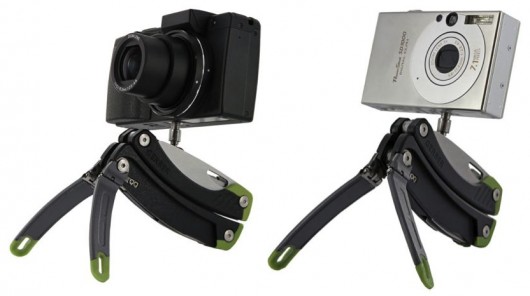 When I first heard about this product, I was terribly confused. Isn’t Gerber the company that produces a bunch of baby food and baby products? Yes, there is a Gerber Products Company, but that’s not the Gerber behind this new Steady multitool. This company is Gerber Legendary Blades, headquartered in Oregon and a subdivision of Fiskar Brands of Finland.

Okay, with that out of the way, we can take a look at the product itself. Gerber has a bunch of different multitools that are similar in scope to a Swiss Army knife, meaning a bunch of tools are shoved into a smallish device. With the Gerber Steady, one of its functions includes a mini tripod for digital cameras. Two legs fold out in the front, the base of the tool acts as the third leg in the minipod, and there’s a tripod screw mount on the top.

Naturally, this won’t do you a heck of a lot of good if you’re trying to steady up your Canon Digital Rebel, but it’s perfectly fine for your PowerShot. I can see quite clearly that at least one of the other tools is a blade of some kind and Gerber is saying that the Steady multitool will have a total of 12 doohickeys in it when it launches next year. Expect the tool to sell for $65.