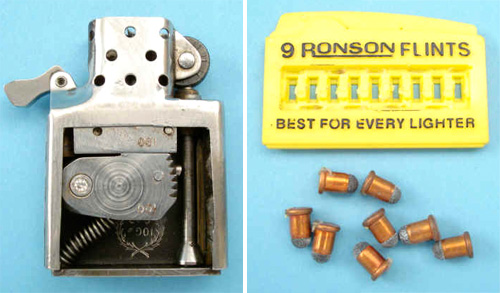 The Zippo lighter has long been a smoker’s favorite accessory. Of course, it is far more expensive than a regular plastic lighter, but no other lighter looks as classy as a Zippo or works as well. There are certain cases when a Zippo lighter may have something else compared to other regular lighters. This happens to be the case of a rare Zippo that disguises a firing mechanism that actually fires.

This apparently normal lighter contains copper-cased 6mm cartridges, that may be fired out of a barrel, as there is no more wick in place. Of course, you won’t find the trigger like in a traditional gun; in order to fire it you would have to roll the flint striking wheel. If you are a bad shot, the rare model even sports a Ronson flint dispenser that can hold extra cartridges. While it has not been officially sanctioned by Zippo (for obvious reasons), the lighter was reportedly sold at auction in 2006 for $6,810, even though it was initially estimated somewhere between $2000 and $4000.

Since we don’t know who the owner is, you should be more careful the next time someone offers to light your cigar.