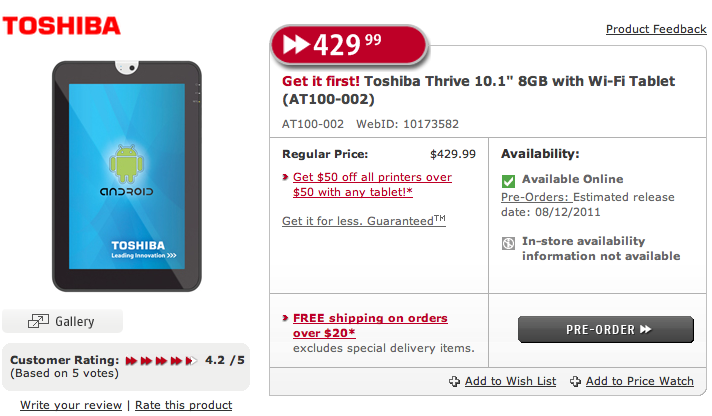 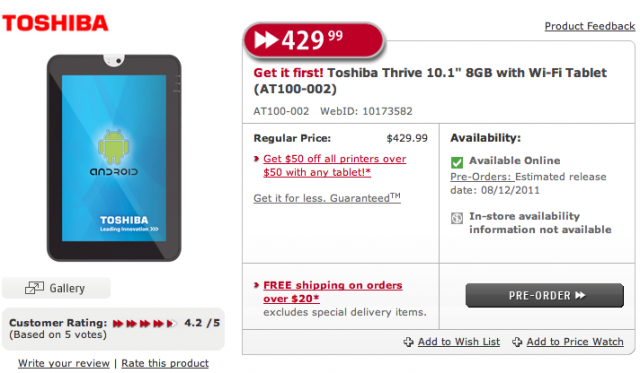 A friend of mine recently expressed a great deal of interest in the Toshiba Thrive tablet. I took a look at the spec sheet and I didn’t see a heck of a lot that made it better (or worse) than the competition. Then, I saw the initial pricing of $599 and got turned off. As it turns out, the Thrive can be cheaper.

Powered by Android 3.1 Honeycomb, the Toshiba Thrive is currently being offered for pre-order through Future Shop. If you go all the way down to the 8GB model, this Android tablet can be yours for $429. The 16GB and 32GB variants are being pegged at $479 and $579, respectively. All of them are expected to ship starting August 12th.

Yes, that’s cheaper than the price points that were originally rumored, but it still doesn’t beat the Asus Eee Pad Transformer for value. That’s still selling at $399 for the 16GB model and Asus really didn’t cheap out on build quality or materials. For now, that’s the benchmark, seeing how just about all these tablets are doing 1GHz NVIDIA Tegra2 and dual cameras. The one selling point that differentiates the Thrive from the rest? You can swap the back cover for different colors, including Blue Moon, Raspberry Fusion, Lavender Bliss, Silvery Sky and Green Apple. Tasty? Personally, I’m more interested in the SD Card slot, plus Mini-USB, USB, and HDMI ports.