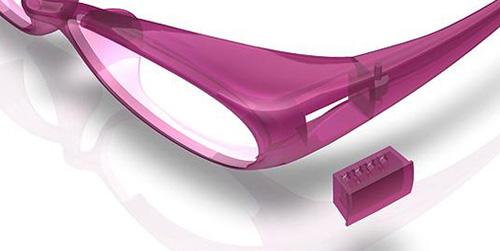 J!NS, a Japanese company that produces glasses, has recently announced the introduction of a pair of “monitor” glasses, especially designed for those spending too much time in front of their computers. J!NS Moisture Glasses were especially created to be worn while working at a PC, in order to avoid those situations of squinting and blinking eyes, or to hopefully prevent other serious eye problems. To keep plowing through World of Warcraft into the wee hours of the morning, just put on these Moisture glasses designed to ease pain and eye fatigue.

The Moisture Glasses feature a moisture reservoir, which is a little container on either side of the frame, capable of providing up to 2 hours of continuous moisture. The moisture will reduce the risk of suffering of dehydrated eyes. Just fill the reservoir with water or a moisturizing eyedrop solution and it will keep your peepers refreshed.
The J!NS glasses reduce the “Blue Light” emitted by PC display, which adds to eye fatigue, by up to 55 per cent. Or so they say.

With all the recent brouhaha around radiation and the harm that PCs, smartphones and other electronic devices can cause, this innocent medical gadget could prove itself to be as a real helper for those who have to spend hours and hours in front of their computer for work and experience sore and tired eyes. The announcement presents a pink version of the glasses but we assume they would come in other colors as well. The glasses are set for release in Japan in October for about $50.