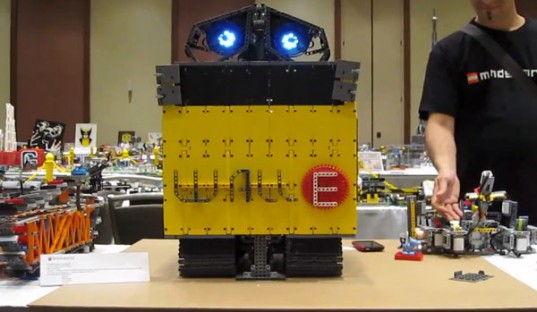 Who doesn’t love the cute harmless Wall-E robot? Montreal-based maker Marc-André Bazergui must love him more than the average Wall-E fan, as the inventor has created his own real life robot using a set of motors and a LEGO Mindstorms NXT Kit. It took Bazergui over 250 hours to build the 20cm tall toy, but it’s sure worth the effort since the robot moves and transforms just like the animated character, sort of.

If you remember the original Wall-E and what it could do, you might be surprised to see that the LEGO-based robot mostly does the same things, transforming and taking the shape of a cube just like its cinematic version. Controlled using a remote, this adorable Wall-E can move around, pick up objects and even look up and down. Plus, it can be programmed in advance to move on its own accord.

Previous versions of LEGO Wall-Es have been attempted before, but no other one is as smart or as funny as this one. It’s not just another toy, as it can even help you around the house by picking up garbage or bringing things to you when you are too lazy to do it yourself. If your inner child is still clawing at your insides and desperate for some Wall-E love, check out the video to see this Wall-E robot in action.