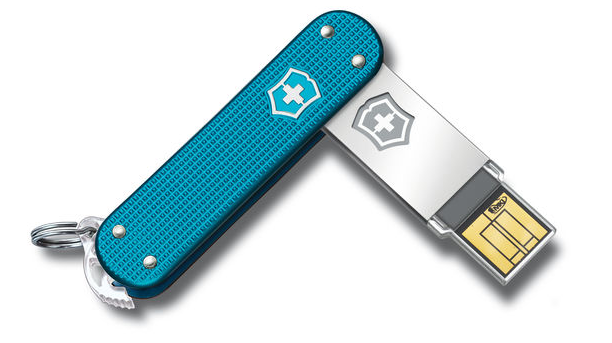 The Swiss Army knife is iconic, but the modern day urban commando doesn’t have nearly as much use for a corkscrew and serrated blade as we may have once had. Unless we’re camping, of course. We use computers, mostly, so we need adequate memory. That’s where the Victorinox Slim and Slim Duo USB drives flip into the picture.

Originally showcased at CES 2011 earlier this year, these drives clearly mimic the look of a real Swiss Army knife (Victorinox is the company behind that line, after all). As their names imply, the Slim boasts a single USB drive, while the Slim Duo hides two USB sticks under its colorful shell. You can choose from silver, blue, orange, pink, and green.

The entire line is now shipping through retailers and e-tailers like Amazon. The cheapest of the bunch is the 4GB Slim at $39.99 and that ramps all the way up to a hefty 128GB Slim Duo for $349.99. The usual capacities slot somewhere in between with pricing to match.