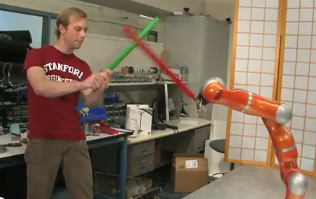 My university career consisted mostly of reading textbooks and writing essays, but it looks like at least one group of students from Stanford have been able to do something a little more practical: develop a robot that will participate in a real-world lightsaber battle.

The Force is strong in this one. Dubbed the Jedibot, the robot doesn’t really have anything in terms of a body. Instead, it’s a mechanized arm with a foam lightsaber at the end of it. What’s cool is that it has several different articulated attack motions and when it detects contact with your foam lightsaber, it’ll recoil and prepare for the next attack. They say that it can unleash an attack every 2-3 seconds.

There’s also a defense mode where it is able to track the relative location of your lightsaber and protect itself accordingly. The 3D tracking is done, interestingly enough, with Microsoft’s Kinect sensor. Yes, the motions aren’t terribly fast, but the core concept is there and it’s totally operational. You’ll notice in the video, though, that Jedibot’s “lightsaber” is red. You know what that means. In addition to Jedibot, the three and a half week long Experimental Robotics course also produced robots that cook burgers and squirt ketchup, play golf, and draw doodles.