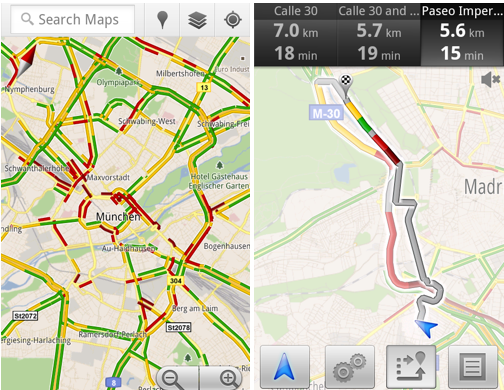 Good news for thirteen European countries.  Drivers can benefit from live updated traffic information through Google Maps. No more unexpected surprises when embarking on a long road, since Google has announced the launch of these traffic reports starting this week.

Using the Google Maps in Austria, Belgium, Czech Republic, Denmark, Germany, Ireland, Israel, Luxembourg, Netherlands, Poland, Slovakia, Spain and Switzerland, you will be able to access traffic reports and to find out how congested a road is, if there are unexpected incidents or even gridlocks, so that they know exactly what to expect when choosing to go on a certain road. Moreover, they can use the Google Maps in order to find an overland route in case they want to avoid a jammed road or even a blocked one.

This live traffic information, available on Google Maps, Google Maps for Mobile and Google Maps Navigation cover all the highways and freeways in the thirteen countries, as well as the larger roads in some main cities. The UK users are even luckier, as their routes will be covered at street level.