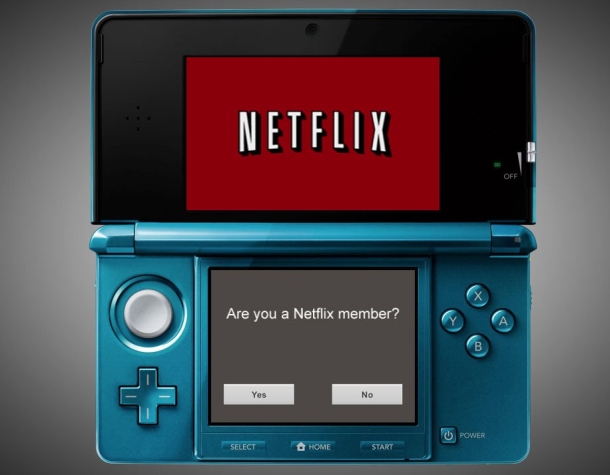 If you’ve got an unlimited streaming plan with Netflix, and own a Nintendo 3DS, you’re in luck. Starting today in Canada and the United States, you’ll be able to download a free app that lets you watch TV shows and movies streaming from Netflix on your Nintendo 3DS. All you have to do is download the free app from the Nintendo eShop and you’ll be able to watch unlimited movies to your heart’s delight, as long as you’ve got the right plan from Netflix.

Nintendo may have jumped the gun regarding the announcement that Nintendo 3DS owners will soon be able to watch 3D movies on their console. Nintendo’s press release states that, “the new Netflix application for Nintendo 3DS displays movies and TV episodes in 2D on the system’s upper screen. Users will soon have access to an additional library of select movies that can be viewed in 3D without the need for special glasses.” So what they’re saying is that you’ll only be able to stream 2D for now, but that 3D movies are coming soon to Netflix. Gizmodo contacted Nintendo, and the company confirmed that 3D streaming will be provided by Netflix one day, but stated that the 3D video service will include 3D trailers and music videos, and not full 3D movies. However, Netflix said they haven’t announced anything about 3D streaming yet, but didn’t come right out and dismiss Nintendo’s claim that Netflix would be streaming 3D movies.

This announcement comes two days after Netflix revealed price hikes for their plans, which include splitting unlimited streaming and unlimited DVDs into two separate plans. The unlimited streaming without DVDs plan will be $7.99 a month, and the unlimited DVDs without streaming plan, which means you get one DVD out at-a-time, will be $7.99 a month. The price for getting both of the plans will be $15.98 a month. Some users online have reported that they’ve already downloaded the Netflix app for the Nintendo 3DS, but here in Canada I’ve got a “coming soon” banner on the eShop. No word on when exactly during the day the app will be available.