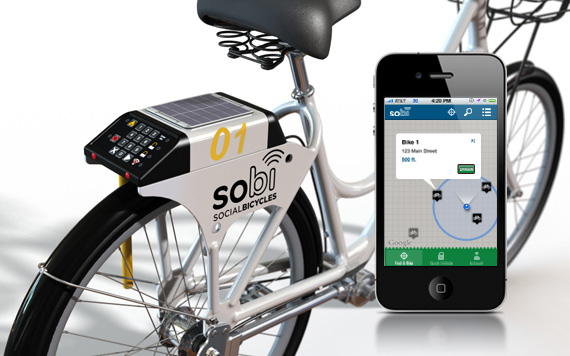 Car sharing programs across North America differ slightly, but they operate in a very similar way. For the most part, you get 24 hour access to a fleet of cars stationed around your city. When you need one you find the car closest to you, book it over the phone or online, and when you’re done, leave it at another car share parking spot. The membership price covers insurance, gas and maintenance, so you don’t have to worry about the pesky details that come with owning a car. Not to mention that it’s better for the environment. According to Car Sharing Canada, each member reduces their driving by as much as 50 per cent, and every shared car replaces 6 – 8 private cars on the roads.

Sounds good, right? Not only are you saving money but you’re helping out the environment too. But why not take it even further with bikes? They’re even greener than cars, cheaper and a great way to get exercise. That’s where the Social Bicycles (SoBi) project comes in; which claims to be the world’s first bicycle with an on-board computer, mobile communications and an integrated GPS-enabled lock.

New York City urban planner Ryan Rzepecki started SoBi in an attempt to improve on other bike sharing programs. Many of the programs require the bikes to be picked up and dropped off at a central rack or kiosk. This is often inconvenient for many people, and SoBi wants to fix that. The SoBi bikes would have no home base. For this program, you would use an app to find the bike closest to you, and then you’d have 15 minutes to walk to its location, where it would be patiently waiting for you on a bike rake. You would unlock it using your phone, or by entering your account information directly into the keypad on the lockbox. While you ride, an onboard GPS would keep track of your location.

Since there’s no home base, the bikes would have “hub” areas that would be their domain. SoBi has an incentive program in place to keep the bikes in the hubs. If you left a bike out of its hub, you would have to pay a fee. If another rider were to take your bike back to the hub, they would receive a credit. Other than that, once you get to where you wanted to go, you would lock it and leave it for the next rider.

Rzepecki imagines that the membership plus use model would cost $10 a month, which includes one free hour a day and $5 for each additional hour after that. The bikes themselves would be custom-built city cruisers, with integrated lighting powered by an onboard solar panel, which would also power the electronics. An initial fleet of bikes to be used in a New York City pilot project has already been ordered, but the SoBi crew is raising money to develop the system for the bikes.