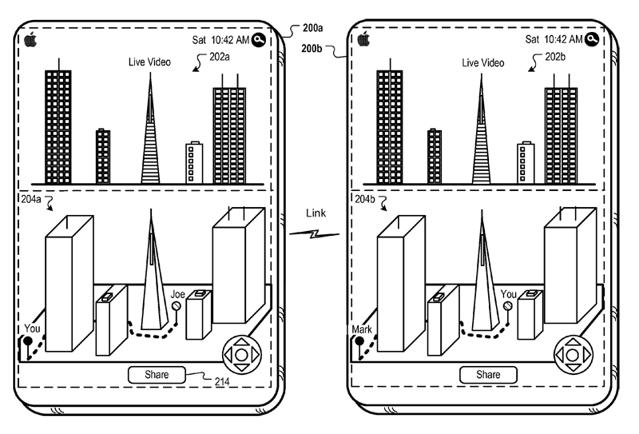 With the next iPad, it’s reasonable to expect a higher resolution screen and a more powerful processor, but it’s possible that we could be getting a hefty dose of augmented reality when it comes to the next-gen tablet too. Apple recently filed a few patents and they seem to outline at least two interesting propositions.

Let’s start on the lower end of the spectrum. In this instance, the iPad display would be split in half. The top half is a live video as being shown by the back camera on the iOS tablet. The bottom half, however, is a 3D representation of what you see, updating in real time, highlighting recognized objects. Your location and orientation would be based on GPS, WiFi, cell tower ID, as well as motion sensors. In this way, it works kind of like Sky Map for Android, but for buildings and such.

But that’s a split-screen. Where the patents start to get more interesting is in the implementation of multiple displays layered on top of one another, some of which can be transparent at times. This would overlay the AR information onto the main screen, which I think works a lot better. In both instances, there could also be a “share” button so you can share your AR viewpoint with another iOS buddy. You can also place a virtual pushpin off in the AR 3D distance and the app would tell you how to get there.

And Apple might take it even further too with fully transparent displays. Samsung has already demonstrated this, but Apple would likely polish it up. A possibility would be replacing (or overlaying) windows in a tour bus with these transparent displays, providing an AR viewpoint for the travelers as they pass points of interest.

Alas, these are just patents. Apple files tons of them and most never make it to production in any form. That said, wouldn’t you want to see some crazy clear AR action on your iPad 6?