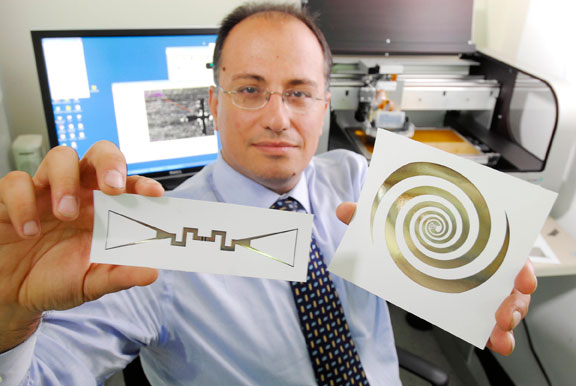 Electromagnetic energy flows all around us, being transmitted from sources such as radio and television transmitters, mobile phone networks and satellite communications systems. Lately, there has been a lot of attention on the negative aspects of the electromagnetic spectrum, including the non-ionizing radiation we’re constantly exposed to that may cause cancer.

Despite the potential ill effects caused by such radiation, electromagnetic energy has some obvious benefits. Even better, there might be a way to take further advantage of it. Researchers from the Georgia Institute of Technology have found a way to put all that electromagnetic energy floating around to use. They’ve managed to create a device that captures and harnesses ambient energy so it can be used to power small electronic devices like wireless sensors, microprocessors and communications chips.

“There is a large amount of electromagnetic energy all around us, but nobody has been able to tap into it,” said Manos Tentzeris, a professor at Georgia Tech. “We are using an ultra-wideband antenna that lets us exploit a variety of signals in different frequency ranges, giving us greatly increased power-gathering capability.”

The team combined sensors, antennas and energy scavenging capabilities to create the device and used inkjet printing technology to get it onto paper. The technology can take advantage of frequencies from FM radio to radar, a range of 100 Mhz to 15 GHz or higher; it can capture this energy, convert it from AC to DC, and then store it in capacitors and batteries. So far the team has been able to generate hundreds of milliwatts by harnessing the energy from TV bands. One milliwatt or more is enough to operate small electronic devices. They have also managed to operate a temperature sensor using electromagnetic energy captured from a television station that was half a kilometer away.

Applications include airport security, heat and stress sensing for defense, radio frequency identification tagging for manufacturing and shipping, and monitoring tasks in communications and power usage. Further applications include assisting solar devices with charging batteries, and acting as a system backup.