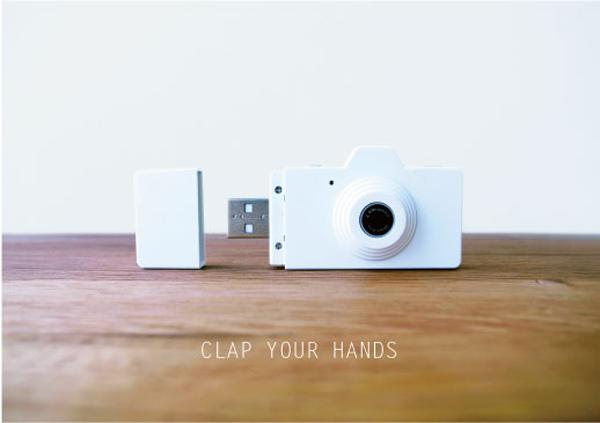 I’m not entirely sure why someone would want this aside from the novelty factor, but the novelty factor has been enough to sell a whole whack of other products already. What you have here is a very simple digital camera that is quite small.

They’ve shaped it to look like a conventional camera, including the “bump” where you might normally find a hot shoe, but that’s not really a functional bump. It’s just for look. You can then pop out the side cap to reveal a USB connector, which is used both for transfering images and video off the camera and for charging its internal lithium-ion battery. It takes microSD cards up to 16GB.

The images can be up to 1.3MP (1280×1024) and the videos can be up to 720×480 in resolution, despite the CLAP having a 2MP F2.8 lens. You can expect image quality to be similar to that of an entry-level webcam, it seems, so it’s probably a better idea to whip out your iPhone or Droid instead. I don’t see this tiny camera being all that more discreet, considering it’s shaped like a camera and has a very obvious lens too. It also doesn’t help that you have no viewfinder to frame your shot.

Shrug. I guess there’s a place in the market for almost anything and there are certainly worse ways to spend $49.95. I can think of lots of better ways though.