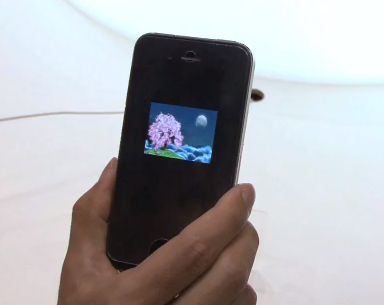 Many smartphones, such as the LG Optimus 3D or HTC Evo 3D have three dimensional display capabilities. But what if you just want to try the 3D hype without having to buy another expensive device? Global Wave was just thinking the same thing, and went and made the Pic3D film. The thin film layer you apply over top of your display is said to create a glasses free 3D experience.

The common 3D films made by manufacturers are based on a parallax barrier, found for example in the Nintendo 3DS. However, the Pic3D uses a lenticular system, which is said to offer a light transmission level of  90% and offer an increased field of view, up to 120°. Moveover, Global Wave announced that it will make the sheets available in various formats, ranging from 3.7”, all the way to monitor sizes of 23 inch. This includes support for iOS devices, such as the iPad, , iPhone and iPod Touch and who knows, the iMac too.

Let’s not forget that this is merely an artificial adjustment. While you’ll surely have fun with the Pic3D, don’t expect it to be anywhere near as good as a device with such a technology built into it.  Coming in at just around $25 for the iPhone version and as much as $185 for a 23 inch monitor solution, it’s not in any way the end of the world and a lot less expensive than replacing your current smartphone with a 3D device.  Besides, you can’t even buy a 3D iPhone, and who knows if you ever will.