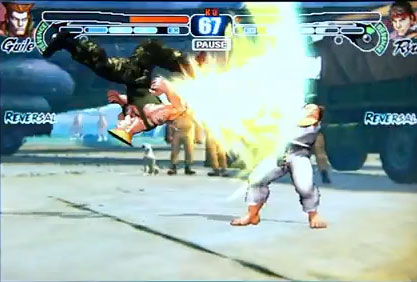 First, you get true online multiplayer. You can’t seek out battles through a 3G connection, but hop onto that Wi-Fi and you can face off against other iCompetitors from around the world. That was the single greatest selling point for me when I bought Super Street Fighter II Turbo HD Remix some years back on XBLA, so it’s good to see the same kind of thing showing up on the portable end of things too. You don’t need a 3DS and Street Fighter IV 3DS Edition to shoryuken on the go.

The other big update is the huge roster expansion. The first Street Fighter IV for iPhone launched with just eight characters, though Capcom added a few more as updates down the road. With Street Fighter IV Volt, you get 18 characters right out of the box. That’s pretty amazing, given that this is “just” an iOS game. Highlights include Sagat, Bison, and Vega, as well as Cody from the SSFIV update. No Oni, Evil Ryu, or Yun/Yang just yet.

If you pick up the game today through the App Store, you can get it for the bargain price of 99 cents. However, Capcom is upping the price a buck every day until it reaches its regular price of $6.99. So, if you’re on the fence, I suggest you make up your mind soon.