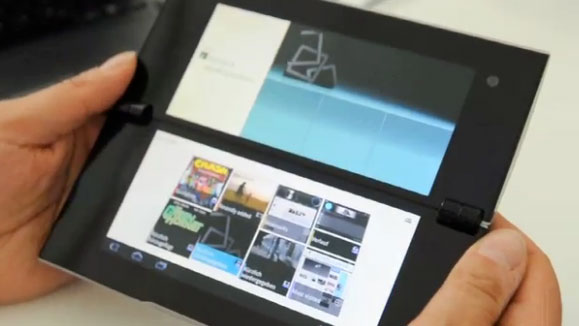 We caught official wind of the Sony S1 and S2 Android tablets a few months ago, but now we’ve managed to find a hands-on video with at least one of the Honeycomb tabs. The unfortunate part is that the hands-on video is a mere 18 seconds long.

In the clip, we get a pretty decent look at the dual-screen wielding Sony S2, including how it can fold up as a clamshell and how much of a barrier that black line in the middle of the two 5.5-inch displays is going to be. We also note the PlayStation logo, which effectively expands on what the Sony Ericsson Xperia Play is trying to achieve, though without the traditional physical control scheme.

While not shown in the video, the single screen Sony S1 Android tablet was also fondled by German site Golem. They note that it did not have PlayStation branding, though it was used to demo Crash Bandicoot in a 4:3 aspect ratio. They also note that it is quite light.

There’s a lot of UI skinning going on here and Sony will need to be pretty creative about how to overcome the space between the two touchscreens, but the S2 (and its S1 cousin) look like they could have some promise. We expect to see them launch this fall, likely at a Sony-esque premium price of some kind.