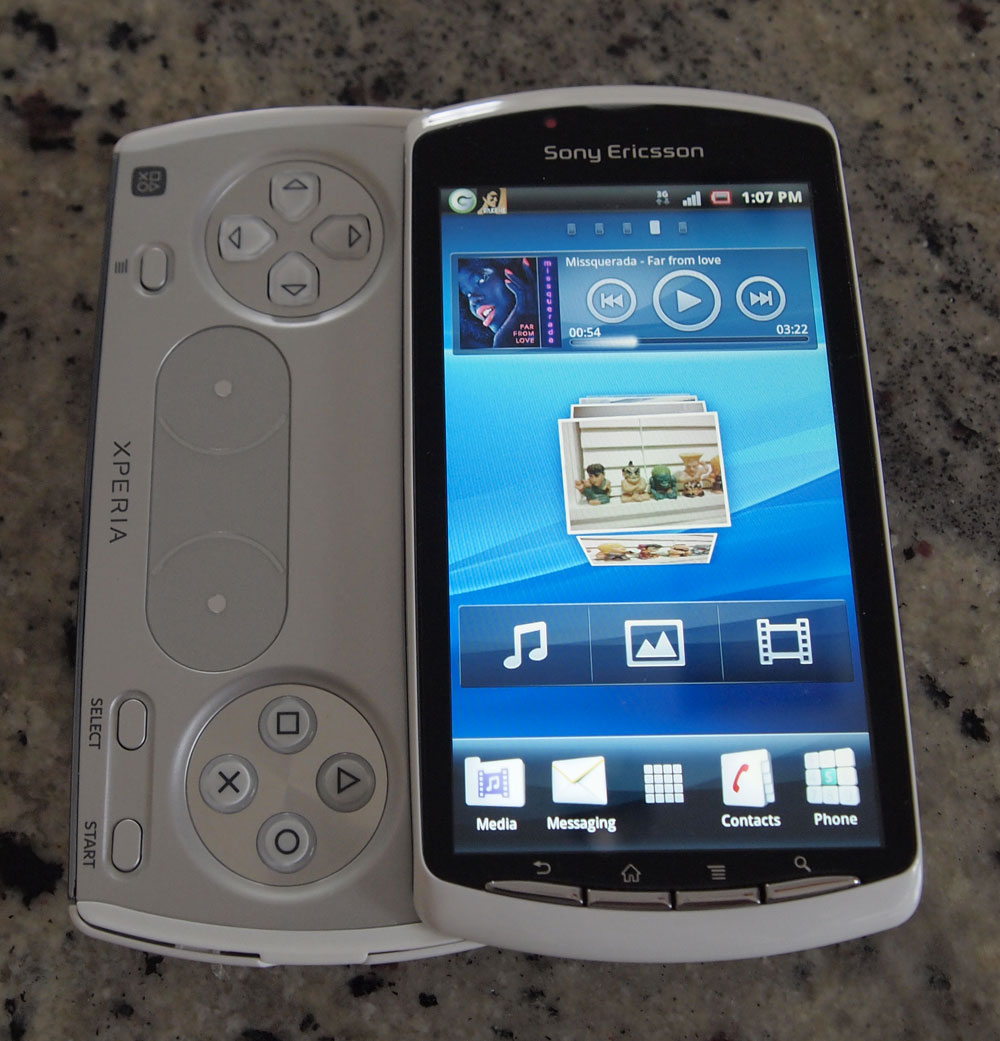 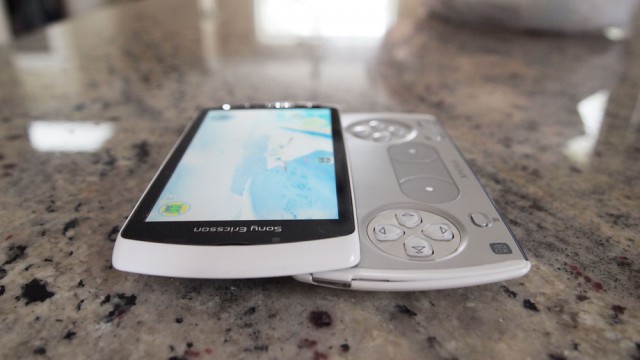 I play a lot of games on my smartphone. The trouble is that a smartphone was never really designed for serious video game playing, and that’s where the Sony Ericsson Xperia Play is supposed to come into the picture. It’s PlayStation certified and is purpose-built to give gamers what they want while still doing the usual Android smartphone thing too.

We caught brief glimpses at this phone earlier this year, but it has now launched through Rogers Wireless in Canada, 3, Orange,  T-Mobile and Vodafine in the UK, and Verizon Wireless in the USA. Is the so-called PlayStation Phone worth all these years of waiting? Let’s find out.

Specs at a Glance

The version that I received to review is white, but they’ve also got the regular black version as well. The two colors are functionally identical. And, not surprisingly, the most notable feature on this smartphone is the set of slide-out gaming controls.

We’ve seen these kinds of sliders in the past, but they’ve always revealed hardware QWERTY keyboards. That’s not the case you. You get a set of controls that mirrors what you’d get on a PlayStation gamepad: four directional buttons, four face buttons (X, O, triangle, and square), start and select. Instead of thumbsticks, you get a pair of optical thumbpads. There’s also a menu button on the face, as well as L and R buttons on the shoulders.

The overall design is in line with other Xperia smartphones from Sony Ericsson. This was built to look more like a phone and less like a PSP, though there are some similarities to the PSP Go. The back is rounded, as are the top and bottom contours. Because of the sliding mechanism, the Xperia Play (at 16mm) is far from the thinnest phone on the block. It’s also not the lightest at a considerable 175 grams of heft.

The sliding mechanism feels reasonably solid, but I’d imagine that this will wear down over time. The gaming buttons feel very solid and should be able to stand up to the same kind of abuse you’d normally give your PSP. I did find the plastic back was a little too slippery, though, especially when in gaming position. Having the volume rocker between the L/R buttons is an interesting choice too. 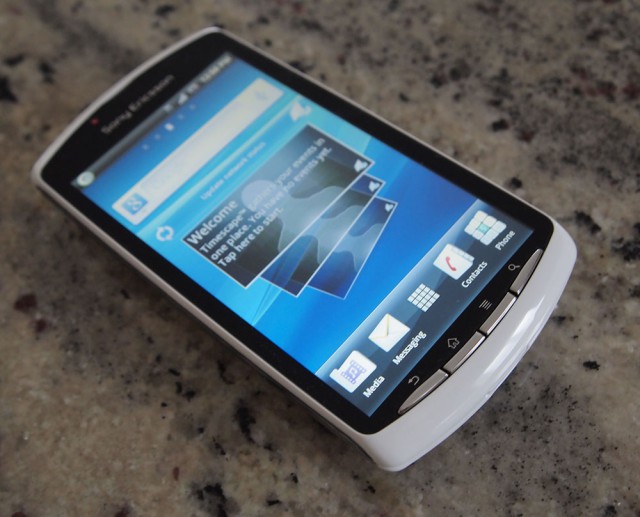 And that’s the real crux of why someone would be the least bit interested in the Xperia Play. You can play all of the usual Android games — Angry Birds, YooNinja, etc. — but the key is playing games that are “optimized” for the Xperia Play. It is a PlayStation certified device, after all, even if it’s not a real PlayStation Phone per se.

What’s cool is that when you slide out the gaming controls, the handset automatically goes to the Xperia Play interface where you can choose your games. These are shown as fairly large tiles on the touchscreen, but what’s odd is that not all of your games show up here. I had other games that were supposed to be optimized for use on the Xperia Play, but I could only access them through the usual Android menu.

As far as controls, while I liked the idea of the optical trackpads in place of true thumbsticks, they didn’t work quite as well as I had hoped. I’m unsure whether they’re too sensitive or not sensitive enough, as I just didn’t get the level of precision and responsiveness that I need when I’m playing games. I tried Star Batallion (a flight shooter) and Hockey Nations 2011 for this purpose and I ended up resorting to the d-pad for the former. I mostly used the optical trackpad for hockey, but it still wasn’t perfect.

I’m not sold on the optical trackpads, for this reason, but I am sold on gaming on this phone. Madden was enjoyable, Crash Bandicoot was a hoot, and emulators would surely be a hit too. Battery life has me worried, though, since the phone could barely last a day even with very, very light usage. 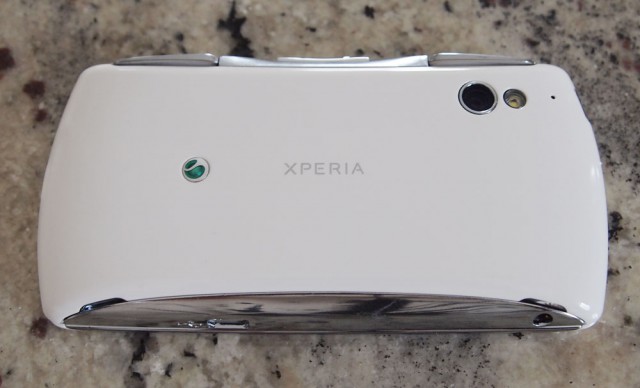 So, How Does It Game?

Other smartphones may have been upgraded to 8MP or even 12MP shooters, but the Sony Ericsson Xperia Play is largely able to hold its own with the five-megapixel camera in tow. The flash is quite powerful and while the images will never compete with a “real” camera, they’re comparable to similar smartphones with similar specs.

What’s interesting is that while Sony Ericsson stuck with that TimeScape UI (albeit a fair bit simplified from its Xperia X10 days) for part of the core interface, the company didn’t do anything to skin the camera app. It’s the vanilla Android camera app, which has some options, but not really enough. I’m sure you could find some fun things in Android Market to help you with that, though, should you feel so inclined.

I get what Sony Ericsson was trying to accomplish with the Xperia Play. We’ve been wanting a real PlayStation Phone for quite some time and this is supposed to be it… except that it’s not. You see, Sony has the PlayStation Vita coming out pretty soon and it’s much more of a PSP than this phone can ever hope to be. The current crop of “PlayStation-certified” games that are “optimized” for this platform aren’t bad, but they aren’t that great either. For the most part, they’re still “just” cell phone games.

If someone really wants to play real PlayStation games on the go, they’ll pick up the NGP PS Vita. I think that if the Xperia Play came out a couple years ago, it had a real fighting chance of attracting some more interest. As it stands, I expect it to end up in the same pile as the N-Gage. The poor battery life certainly doesn’t help either, especially if you plan on playing any games at all for any duration of time.

The Sony Ericsson Xperia Play is available now through Rogers Wireless for $99.99 on qualifying three-year contracts.

* Battery performance does vary greatly on network and phone usage.