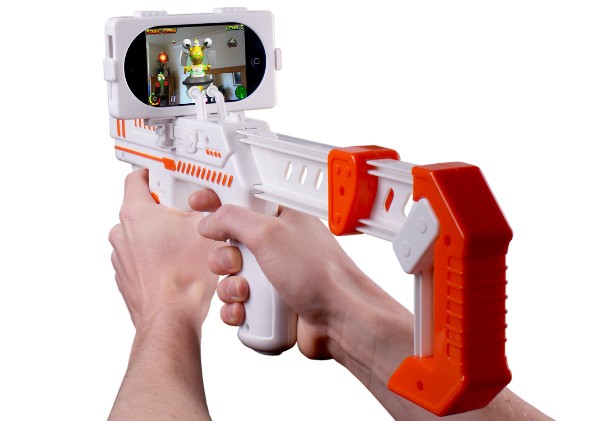 While we’ve all seen gun accessories for the Wiimote or even the Playstation Move controller, some ranging from just a simple gun to even something resembling a bow and arrow, your iPhone and iPod touch will now be able to give you a similar experience.

AppBlaster, a new product design by apptoyz, has been specifically designed for use with the company’s newly released Alien Attack iOS game. Morevoer, since unlike regular console controllers, the Apple products are devices onto their own that include a display, the game  is based around the oldschool Altered Reality machines.

After you buy the Alien Attack game and the appBlaster, just place your iPhone or iPad into the specifically designed holding case and presto! You’ll be able to start shooting aliens from the comfort of your home in a highly interactive fashion.

Based on trigger-to-touch-screen technology, you won’t need to charge or buy batteries for the accessory, as the triggers will simply operate two pads that touch the screen and let you use both primary and secondary shooting function.

Currently, the Allien Attack game can be downloaded for free from the iTunes App Store, with a full version to launch on 6 July, whereas the appBlaster accessory is available for pre-order for about $32 dollars, reported to launch one day later.

London, UK – 8am GMT, June 23, 2011 – RED5.co.uk, the ultimate gadget shop, today launches a world exclusive iPhone and iPod touch toy, the appBlaster from apptoyz. Designed to work with the augmented reality (AR) app, Alien Attack, the blaster demolishes aliens invisible to the naked eye. The appBlaster is exclusively available on pre-order today at www.RED5.co.uk for dispatch on 7 July, for £19.99 and will be for sale at the RED5 concession at Selfridges, Oxford Street from 6 July.

The appBlaster* gives iPhone and iPod touch users a new AR gaming experience. The augmented reality feature of the game means that the alien invasion will be coming straight at you from the surrounding area, so whether you’re on the bus, in the office or at home, there’s no place to hide!

The appBlaster doesn’t require any batteries as it sports trigger-to-touch-screen technology to fire the in-game shooter. The triggers operate two pads that touch the screen and shoot the in-game blaster, allowing the user to use both the primary and secondary shooting functions. To make the experience more realistic, the appBlaster can be cocked and reloaded using the iPhone’s or iPod touch’s motion sensitivity.

Simply download the free app, apptoyz Alien Attack, from the iTunes App Store, lock and load your iPhone or iPod touch to the top of the blaster, and using the unique trigger-to-touch-screen technology, shoot the advancing aliens from all corners of the room. The full version of the free Alien Attack app will launch on 6 July. It can be found after launch by searching Alien Attack on the iTunes App Store. Further apptoyz game apps will be released on the App Store later in the summer.

* appBlaster was known as AppGun in developmental stages.

The first RED5 store opened its doors in 2005 and the company currently has 15 standalone physical shops as well as established concessions at Hamleys and Selfridges. The website www.red5.co.uk followed in 2006, as a result of rapidly growing customer demand. With a priority on quality and originality, the RED5 buying team search far and wide to bring the coolest and most innovative gifts and gadgets to customers, before the rest of the market. Although RED5 may appear to be a new kid on the block, in reality it is anything but, founders Jonathan Elvidge and Joth Baron, were both part of the team behind The Gadget Shop, the original high street gadget retailer.