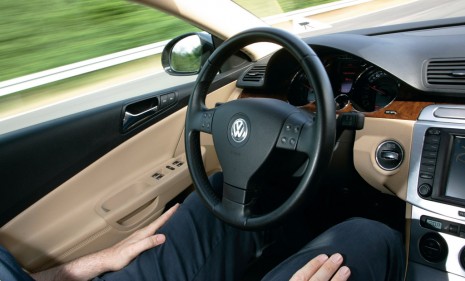 Some people claim that the next big thing in personal transport will be fully automatic, driverless cars. In May 2011, Danish architectural firm BIG proposed a driverless highway system where cars navigate the roads using robotic technology. The benefits of driverless cars, they claimed, were little or no accidents, as humans are responsible for close to 100 per cent of all traffic injuries. To further their point, they pointed out that airplanes operate smoothly on auto-pilot.

While Big’s idea did not progress much beyond plans, Volkswagen is testing a self-driving system that lets you travel up to 80 mph. The temporary auto-pilot technology uses adaptive cruise control, lane assist and a variety of sensors to track your speed, location and all the cars around you. The system observes overtaking rules, speed limits, and can even start and stop during traffic jams all on its own. Volkswagen emphasized that the driver is always in control, and must monitor the car. So no naps or drinking, people. Volkswagen designed the system with “production ready” components so an actual test model may very well arrive in the next few years.

Audi is is also set to test a “driverless” TTS Coupé quattro on the infamous Pikes Peak Hill Climb in the USA.

Currently in the testing phase, the Autonomous Audi TTS quattro is being developed for several still-to-be determined real-world driving challenges in 2010, including a possible drive up the legendary 12.42-mile Pikes Peak Hill Climb route in Colorado USA. This will not be a competition run, however, and is separate from the actual Hill Climb Championships being staged next June.

BMW previewed a left turn assistant system in Germany in May 2011. The system combined camera, laser and vehicle-to-vehicle communication technologies in an effort to make left turns safer. The system utilized three laser scanners in the front end of the car, which mapped the area up to 100 meters ahead. If the system detected oncoming vehicles, and the driver continued to move into the intersection, the system would sound a warning and automatically hit the brakes. Essentially, the car would be acting for you, with the hopes that it could prevent a collision. While driverless technology sounds a little reckless, one doesn’t have to spend much time on the road to see that most people drive hazardously, with no regard for fellow motorists. Will this be another instance where robots make humans obsolete?

Meanwhile, Google is working on their own driverless car, and after pressure from the corporation, Nevada has passed a law authorizing the Department of Transportation to develop rules and regulations governing the use of driverless cars. Watch out, a driverless car might be coming to a road near you.

Future Cars Might Stop You From Texting While Driving