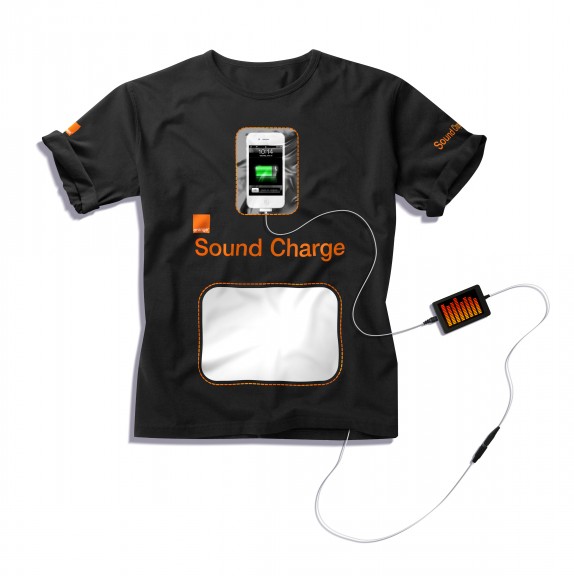 Music lovers at UK’s Glastonbury Festival will have the chance to test out a t-shirt that can charge a cellphone. Orange announced a prototype called the “Sound Charge” that was produced in conjunction with renewable energy designers GotWind. Orange has tested other green charging technologies at past Glastonbury Festivals, including 2010’s Power Wellies, boots that converted heat into current to keep people connected to their devices.

The t-shirt’s technology uses Piezoelectric film, found in modern HI-FI speakers. The Piezoelectric film acts like an oversized microphone, absorbing sound waves and turning them into electric charge. The electricity gets stored in a battery that then charges the cellphone. According to Orange, the interchangeable lead should fit most cellphone models. Unlike the solar bikini’s skimpy design that fails to capture a significant amount of energy from the sun, the t-shirt has a large surface area, which means it can capture a good amount of sound pressure waves.

The Piezoelectric film panel and electronics can be removed, allowing dirty festival-goers to wash the t-shirt likely to be coated in sweat, tears, booze and other side-effects of an outdoor music festival. Orange estimates that when used at the festival with sound levels of around 80dB, which is about the same as a busy street, the t-shirt will generate up to 6 W/h of power over the course of the weekend. I don’t think they’ll have a noise issue. Though wearers of the t-shirt will most likely use it for a quick top up rather than a full charge, it should be able to power two standard mobile phones or one smartphone. Unfortunately, we won’t be seeing these things at the mall anytime soon, as Orange hopes to inspire future development and won’t be developing them for mass production.