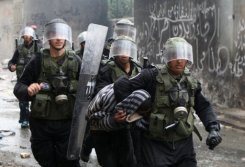 And so it was done. The Israeli government pressured Apple to remove an Arabic-language app called “ThirdIntifada” from the App Store because it encourages a Palestinian uprising. In a letter to Apple CEO Steve Jobs, Public Diplomacy Minister Yuli-Yoel Edelstein said the app passed on information about protests, some violent, planned against Israel.

“Upon review of the stories, articles, and photos published by means of the application, one can easily see that this is in fact anti-Israel and anti-Zionist,” he wrote. “Furthermore, as is implied by its name, the application calls for an uprising against the State of Israel.”

The app gives information about protests, provides news stories about Palestine and the Israeli occupation, and links to nationalistic Palestinian songs and media. It also allows users to post photos and stories about anti-Israel protests, and link items to social networking websites.

“Intifada” is an Arabic word that means “shaking off” and is usually translated into “uprising” or “rebellion.” The First Intifada was a rebellion against Israeli occuptation and lasted from 1987-1993. Israeli forces killed an estimated 1,100 Palestinians, while Palestinians killed about 164 Israelis.  The Second Intifada lasted from 2000 to approximately 2004, though the end of the conflict has been disputed. The Second Intifada claimed the lives of about 6500 Palestinians and over 1100 Israelis.

Recent demonstrations along Israel’s northern borders have raised fears amongst the Israeli government that protesters could storm Israeli checkpoints or settlements in the West Bank. Thousands of Israeli police recently took part in a training exercise in preparation for potentially large-scale Palestinian protests. In March, Edelstein requested that a “Third Intifada” page be removed from Facebook. The page called for an uprising against Israel through the use of lethal force, and was removed, though there are many copycat groups currently on Facebook.

Apple recently updated their App Store guidelines to reject apps that reveal DUI checkpoints. Whether Apple will bow down to pressure from the Israeli government to ban pro-revolution apps remains to be seen. Apple spokesman Tom Neumayr said Wednesday the app was removed “because it violates the developer guidelines by being offensive to large groups of people.”