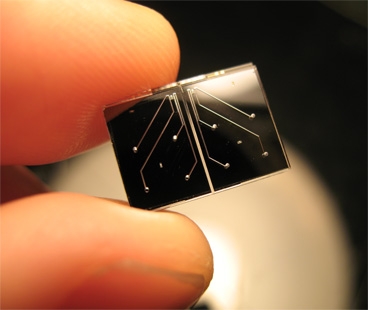 You’re probably familiar with the story of Archimedes, the Greek mathematician and inventor who ran through the streets naked, shouting Eureka! Prior to Archimedes’ streaking spree, King Hiero II had asked him for a favour. The king had asked his goldsmith to make a crown out of pure gold, and he suspected the goldsmith had been dishonest and threw some silver into the mix. Archimedes had to determine whether the goldsmith had been dishonest without damaging the crown. He mulled it over in the bathtub, and when getting into the tub, Archimedes realized that the level of water in tub rose. He came to the conclusion that he could use this effect to determine the volume of the crown. He then sprang out of the bath, and was too stoked on his discovery to get dressed so the city saw a bit too much of old Archimedes.

MIT researchers are using this same principle to measure the density of a single cell. The researchers designed a tiny microfluidic chip that can measure the mass and density of single cells. The device weighs a cell using a suspended micro-channel resonator, which is the size of a human hair. The resonator vibrates at a certain frequency. When a cell passes through the resonator, the frequency changes by an amount proportional to the weight of the cell. To determine the mass, volume and density of the cell, two different fluids that have different densities are used. The researchers measure the cell’s weight while its surrounded by one fluid and then the second fluid. From these two weight measurements, they can measure the mass, volume and density of the cell. The device rapidly exchanges the fluids in the channel without harming the cell, and the entire measurement process for one cell takes five seconds.

“Density is such a fundamental, basic property of everything,” said William Grover, a research associate in MIT’s Department of Biological Engineering. “Every cell in your body has a density, and if you can measure it accurately enough, it opens a whole new window on the biology of that cell.”

Potential applications for the method include testing athletes for “doping.” This is when athletes remove their blood and store it until a day or two before their competition, then transfuse it back into the bloodstream, giving red blood cells a boost. Since storing blood can alter density, the method could potentially be used to catch cheaters. The researchers are currently investigating the densities of other types of cells, and are starting to work on measuring single cells as they grow over time, like cancer cells, which are characterized by uncontrolled growth.