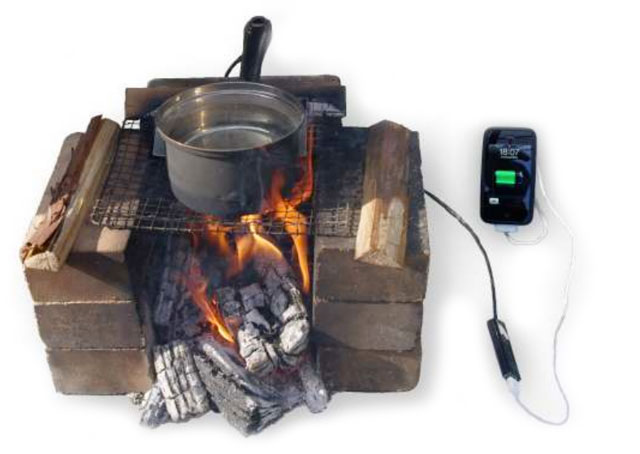 A Japanese company could have the solution for people stranded during a disaster who need to power up their cellphones and dial for help. Imagine a gadget that could charge a cellphone from a simple campfire. The Hatsuden-Nabe thermo-electric cookpot turns heat from boiling water into electricity. A USB port then feeds that electricity into devices such as smartphones, music players and global positioning systems. Chief executive Kazuhiro Fujita came up with the idea after watching news footage of the devastation.

“When I saw the TV footage of the quake victims making a fire to keep themselves warm, I came up with the idea of helping them to charge their mobile phones at the same time,” Fujita said.

The pot features strips of ceramic thermoelectric material that generate electricity through temperature differentials between the 550 degrees Celsius at the bottom of the pot and the water boiling inside at 100 degrees. According to the company, the device takes three to five hours to charge an iPhone and can heat up your lunch at the same time. During an emergency, the pot could be carried in a small bag. TES NewEnergy, based in the western city of Osaka, started selling the gadget in Japan this month for about $300 US.

While the pot would come in handy in emergency situations like an earthquake, there are over 500 million people in Sub-Saharan Africa who lack power in their homes. Yet 22 per cent of households in the region have cellphones. The people who live there often have to walk long distances to charging stations, paying each time for a single charge. Phones are crucial as people living in remote areas use them to contact health care practitioners, use health care apps or talk to distant family and friends. While a dirt-powered cellphone is currently being tested in a field study, the pots could help out the people in developing countries without power. Hopefully they can donate a few to those in need, or find a way to bring down the $300 price tag.