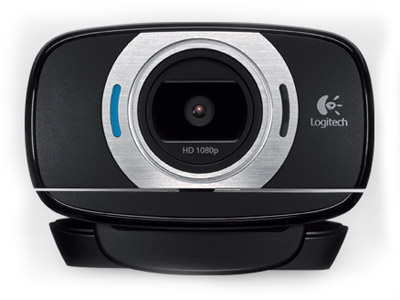 Logitech’s HD C615 brings true 1080p HD video recording to your PC or Mac computer.   If you didn’t have one built in to that old school MacBook Pro or iMac, here’s your chance to get digitized in high-def.  The autofocus cam has a compact fold-and-go design which lets you rotate it 360 degrees, fold and go where? I don’t know, since you’ll be tethered to your computer.  If Logitech embedded support for microSD it would have been useful, but its awfully late at this stage of the game with nearly everything shipping with HD this and HD that.  The computers this will support may not even be able to playback a smooth HD feed anyway.  The cam will work on a 1 GHz machine with 512 mb ram, however to use the HD 720p calling and 1080p video recording you’ll need at least 2.4 Ghz Core 2 Duo and 2GB ram.  So who is buying this thing?

In all fairness, it does have “Fluid Crystal” technology, which Logitech touts as being the all new Smoother, Sharper, Richer, Clearer technology for web cams.  But doesn’t actually say why or how.  One of those you gotta see it to believe its?

With integrated autofocus, an 8 M P sensor that can capture image stills, the Logitech HD Webcam C615 will arrive in September for a price of 80 Euros ($115 USD) .