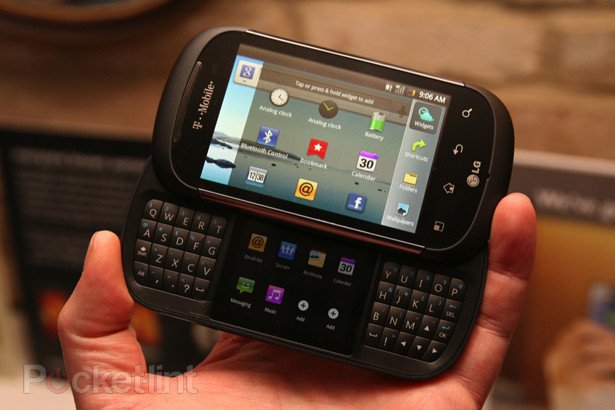 It’s not the first Android phone with two screens — we’ve already seen the LG Genesis and Kyocera Echo — but this yet-unnamed handset also has a full hardware QWERTY keyboard. As you can quite plainly see from the photo, you get a regular touchscreen, plus a smaller one that fits in between the two halves of the keyboard.

This is quite the interesting form factor, I’d have to say. It’s probably a little on the fatter side of things, thanks to the two-layered slider, but it could prove to be quite functional. The “split” keyboard could be better for thumb typing too. I’d imagine the secondary display isn’t quite as useful as a full-sized screen, but it could still be good for shortcuts, macros, options, wasting battery, those types of things.

We’ll keep our ears to the ground for this, but we’re hearing that the dual-screen Android from LG is going to make its way to T-Mobile UK. No word on a US release just yet.