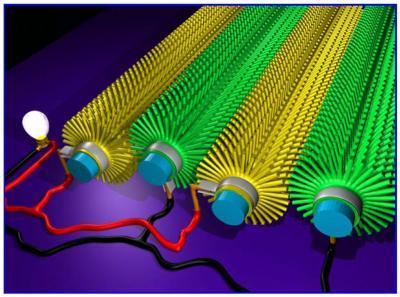 When a conventional battery runs out, you can do one of two things; charge it or replace it.  But what if you didn’t have to do that anymore? What if that device was powered by the energy that you emit, your pulse.  It’s constant, if it wasn’t, you wouldn’t be worrying about the battery now would ya?

Scientists have developed the first ever self-powered nanogenerators that scavenge energy from different sources in the environment such as airflow and vibration. The matrix is born.  Anything from a light breeze to the thump of your pulse could power the nanogenerator. The energy produced from the vibration is stored in a capacitor and used to power sensors, or even a small wireless radio like the one found in a Bluetooth headset. Signals from these wireless radios can be detected up to 30 feet away.

Technology like this could replace batteries and be used in tiny spy cameras, wearable electronics and medical implants. It could make things easier for pacemaker patients who have to go under the knife because the pacemaker runs on a battery that needs to be replaced. Though it begs the question of what happens when you take your watch off at night?  Would it be charged simply by leaving it near your open window, the light breeze giving it power?