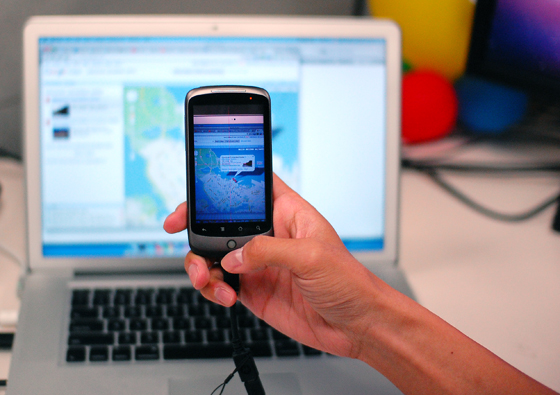 There you are, five pages deep in search results on your desktop and its time to hit the road. You’ve surely been in some type of situation where you have looked up something on your computer and you wanted to take that information with you on your cell phone, immediately. Instead of typing out and doing the search again on your smartphone, or emailing yourself the url, or using some unified cloud service like delicious, you may soon be able to use your camera with something crafted out of an MIT lab called Deep Shot.

The core idea works with recognizing the URI of what is being shown on your computer, but Deep Shot goes even further than that. Depending on what part of the screen you’re shooting with your camera phone, it may open a different app or focus on a different aspect. Say you’re using Google Maps. Shoot the map and it might open up Google Maps on your Android phone with the location of interest. Shoot the business listings in the sidebar and it might open that on the phone instead.

Google owns the rights to Deep Shot, since Chang worked on it while at Google, so it’s very well possible we’ll be seeing this in Google Labs or Beta in some form at some point in the future. And then Apple will surely copy it, call it iShot, and say that it ‘s revolutionizing the industry all over again.