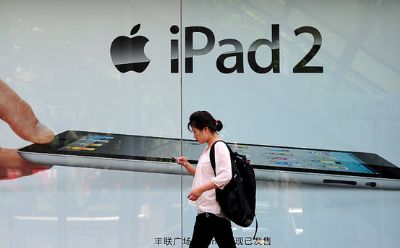 The Chinese courts take intellectual property very seriously. Only in China would you get a jail sentence of over a year for leaking images of the back cover of the iPad 2.  Shenzhen MacTop Electronics Co., an electronics-accessories manufacturer, wanted to start designing cases for the iPad 2 before its release. So the general manager, Xiao Chengsong, decided to offer about $3,000 USD plus discounts on MacTop products to a former Foxconn employee named Hou Pengna for inside information about the tablet. Foxconn makes the iPad 2 for Apple in its factories in China.

Ms. Hou then paid a Foxconn employee named Lin Kecheng to get digital images of the device’s back cover from last September, six months before the iPad 2 was publicly announced. The court spared no pity on the three collaboraters, and announced on Tuesday that each person would get a jail sentence of at least a year. Xiao Chengsong got 18 months in prison, and was fined about $23,000. Hou Penga was sentenced to a year in prison and fined about $4600. Lin got 14 months and was fined about $15,400.  These three will be waiting longer than all of us for a jailbreak.

The Shenzhen court said that MacTop had begun manufacturing cases for the iPad 2 and promoting them online before the iPad 2 was released, using information obtained illegally. The court claimed the whole affair caused huge losses to Foxconn. Lesson of the day – don’t steal intellectual property from Apple in China. In the USA on the other hand, it seems that you’ll only get your house raided.