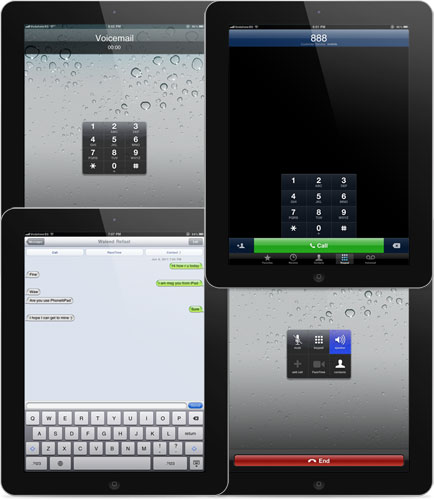 Maybe you’re one of those crazy kooks who didn’t get an iPad because it does not offer the possibility of making phone calls. Sure, there’s all kinds of voice apps and Skype apps, but now with PhoneIt, you really turn your iPad into a gigantic iPhone since you can make and receive phone calls or send text messaging using PhoneIt. The app has been developed by iPhoneIslam and runs on jailbroken iPad tablets only (that leaves the iPad 2 out of the question); therefore you should not expect to see it in the AppStore. PhoneIt-iPad does not require data-only SIM cards, which are usually provided for the iPad; the app works with regular 3G SIM cards. If you want to install this app on your iPad so as to use your tablet to make phone calls, you might consider using a headset. The iPad is quite big and it would be uncomfortable to hold it to your ear, not to mention that people will definitely make funny faces when they see somebody talking on the iPad on the street. PhoneIt-iPad can be purchased from Cydia for $20. A video recorded by iPhoneIslam while testing the app is also available.