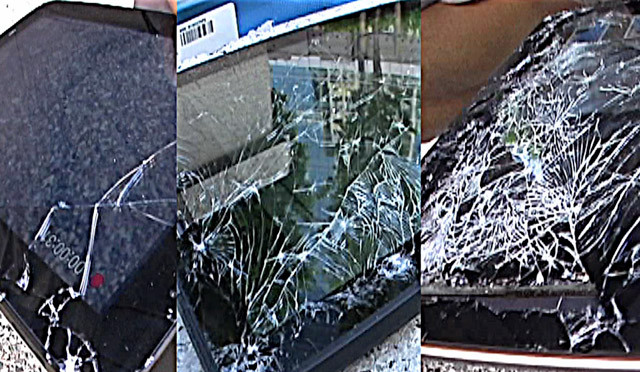 The guys at Square Trade have thought to drop test different tablets to see how well they fare. They started out the test series with an iPad 2 covered in a Smart Cover and a bare iPad 2. The tablet wearing the Smart-Cover survived the drop and its display remained intact. Unfortunately, the other iPad 2 which did not have the cover on did not do very well in the test, to say the least.

The same guys thought they should extend their drop tests to other tablets as well and their most recent experiment involves the iPad, Motorola’s Xoom tablet and Samsung Galaxy Tab.

The iPad was the first to be dropped from waist level and did not fare well at all. The tablet became unusable after the drop or, to quote one of the testers “the screen feels like it’s gonna start popping out, just fall apart.” Galaxy Tab was then dropped and “survived kind of” the shock with only minor cracks. Motorola Xoom was the last to undergo the test but became unusable just like the iPad. And the winner of the most-fragile-tablet title is the iPad.

In a nutshell, the test results are as follows: 3. Galaxy Tab; 2. Motorola Xoom; 1. iPad