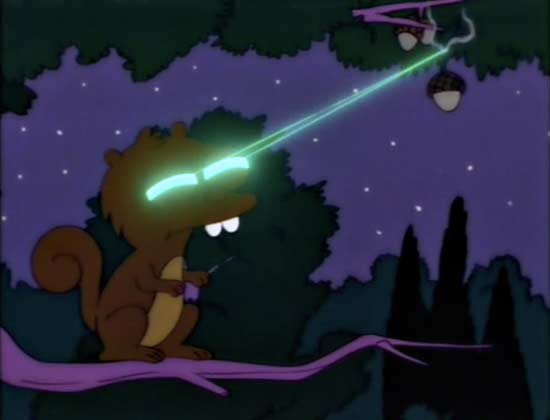 The dangers of cellphone radiation have been a hot topic lately, particularly after the World Health Organization gave the sobering announcement that cellphone radiation could possibly increase the risk of brain cancer. Additionally, research came out that suggested cellphones are responsible for killing off bees. They aren’t getting a good rep right now. While I was scared for a few minutes and considered ditching my Blackberry and running into the woods to live in a shack, I realized I love convenience too much.  They’re not going to turn nearby cell tower squirrels into radioactive freaks just yet, but there is some concern. So instead, here are some ways to keep your brain, and other body parts, safe from potentially hazardous cellphone radiation.

Turn your phone off or use airplane mode.

When not using your phone, turn the thing off. Problem solved. If you can’t, many phones have a function that allows their cellphones to be used on airplanes. Airplane mode cuts off all wireless transmissions from your cellular device, so there is no radiation being emitted. A bonus is that the phone uses less energy to operate when wireless transmissions are halted, so it saves battery.

Guys, don’t keep the phone in your pocket.

If you’re a guy and you keep the cellphone in your front pocket, you could be putting your sperm count in danger. A recent study suggests that cellphone use is linked to lower sperm quality and a decrease in fertility. While cellphone usage seems to increase the level of testosterone in the body, there is a lower level of luteinizing hormone, which plays a big role in the reproductive system. If you’re looking to start a family at some point, better keep your phone away from the family jewels. Turn off your phone, put it on airplane mode or get a satchel.

Don’t check Facebook in the middle of the night.

Some people take their phones to bed with them, which can disturb sleep. According to a survey done by iPass, 58 per cent of those surveyed who keep their smartphones within arm’s reach wake up during the night to check their phones. About 11 per cent of those people checked their phone every single night. Even if you’re not that compulsive and use it as an alarm, cellphone radiation can still impact your sleep. A team of researchers in Sweden did a one-year study where they followed over 4,000 young adult cellphone users. Their research suggested that a high frequency of cell phone use can lead to increased sleep disturbances. If you use your phone as an alarm clock, put it in airplane mode.

As I’m sure you know, sending texts requires less signal power than making calls. Texting is a simple way to avoid radiation exposure, so when you can opt for texting over calling them. Unless you’re texting to break up with someone. Then you’re just being a loser.

Use an air-tube headset.

While the cellphone industry loves to tout headsets as “safer,” the wires used can drive harmful cellphone transmission straight into your ear. An alternative is an “air-tube” headset that functions similar to a stethoscope. It uses a hollow air-tube to transmit sound from a speaker located at a distance from the head. The tube and earpiece contain no metal conductors, which eliminates any radiation present in conventional headsets.

Use the speakerphone setting.

No cash for a new headset? Use speaker mode when talking on your cellphone and place the phone at least 5 feet away from you. The farther the cellphone is the better. Just make sure they can still hear you.

Don’t have an hour long conversation with your boyfriend or girlfriend before bed. Even a two-minute call has been found to alter the natural electrical activity of the brain for up to an hour afterwards. Use Skype if you want to say goodnight or to catch up with an old friend or call your parents. Provided you don’t have one of those old school computers with the giant monitor.

Be mindful of good and bad reception.

The harder the phone works to establish a connection, the more radiation is being emitted. Don’t use your cellphone in an area with poor reception. If you’re trying to talk to your buddy on the subway, just wait until you get to an area with better reception. Don’t use the cell phone in enclosed metal spaces such as vehicles or elevators. Also, wait for the call to connect before placing your phone next to your ear.

By following any of these simple steps, you’re reducing the amount of cellphone radiation frying your brain and affecting your body.