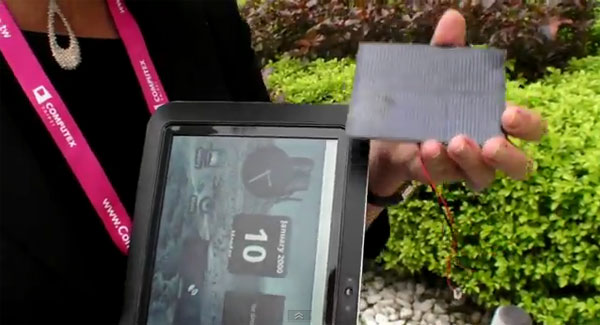 Pixel Qi, an American company that designs low-power laptop screens, showcased a tablet powered by a small solar panel at Computex Taipei 2011 in Taiwan this week. The panel generates 1W of energy, which is enough to power both the screen and the motherboard on a low-power tablet specially designed by Pixel Qi.

The solar array costs a whopping $3, and thanks to a specially designed tablet that requires less power, the tablet could run for days or even weeks without needing to be plugged in. If you leave it in the sun for just three hours you use it for more than three hours at night. It would be a saviour for those moments when you swore your phone was in the yellow with plenty of bars, but suddenly you look down to see you’re in the red. As long as it’s a sunny day, you could charge your phone just by keeping it outside to soak up those rays.

The panel can also be modified and installed in the bezel of a tablet. Although this is still a concept, we might one day see tablets powered by solar cells in the same way pocket calculators are powered by the sun. Eventually, maybe we could get rid of pesky chords all together and seriously reduce the amount of e-waste floating around in developing countries.