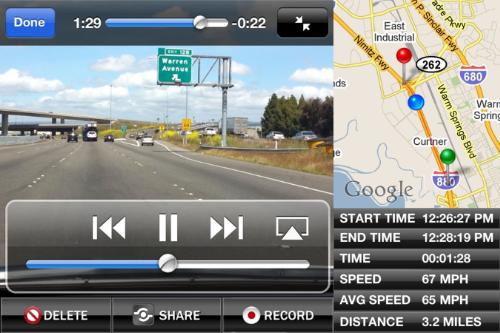 DashCam is an iPhone app developed by St. Edward Enterprises that allows drivers to track the route they are travelling on Google Maps and display speed and distance as well. To do this, the app uses the iPhone’s rear camera, Google Maps and the GPS. The recording can be used as evidence should an accident happen or for learning purposes. Users can share the video recording on various sites such as Facebook or YouTube, it also makes a pretty sweet HUD.

The route tracking feature of DashCam records every point travelled on the map and creates a virtual road represented by a red line overlaid on Google Maps. A green pin represents the starting location, the red one stands for the arrival point and a blue pin represents the current location.  Video can be recorded in three resolution modes: high, medium and low and in all landscape and portrait modes.

During video playback on the iPhone, a blue dot displays a user’s location at a given time showing where the video was shot. Speed, average speed and distance are also displayed during playback. The fast forward and rewind features are available and the AirPlay feature let users share the video via AirPlay enabled devices.

DashCam is iPhone 3GS,  iPhone 4 and iOS 4 and later compatible and can be purchased from the AppStore for just $2.99.