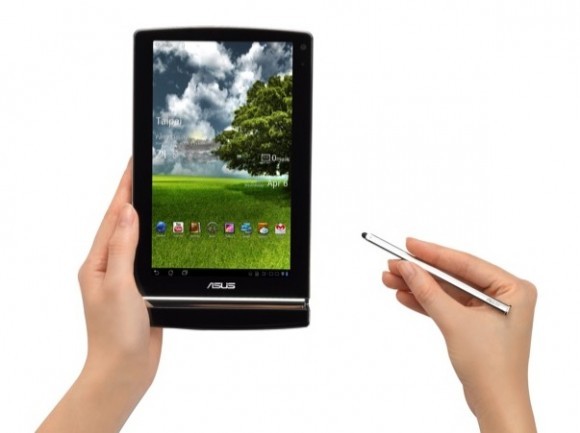 Asus has unveiled a fourth tablet at Computex 2011 to go alongside the recently announced PadFone. The Eee Pad MeMO 3D runs Android Honeycomb, has a 7″ multi-touch screen and is powered by a Qualcomm 1.2 GHz dual core processor with 1GB of RAM and 32GB of onboard storage.

The portrait-oriented tablet has stylus support, so you can treat the MeMO 3D like a digital notepad. The tablet also comes with a MeMIC Bluetooth hands-free headset s0 you can make calls from the device. The glasses-free 3D display allows you to watch movies and play games in 3D, but only in landscape mode due to the parallax barrier technology Asus used for the tablet.

The device has a 1.2 MP camera on the front and a 5 MP camera with LED flash on the rear of the tablet. Asus hasn’t revealed pricing or a specific release date for the Eee Pad MeMO 3D, but have suggested it would be released in late 2011. Back in January Asus said the Eee Pad MeMO without 3D would be priced around US$499-$699 at with a June 2011 release. We’ll see how much extra money they pin onto the price with the newly added 3D feature, though with the feature only being available in landscape mode, it better be a minimal price increase.