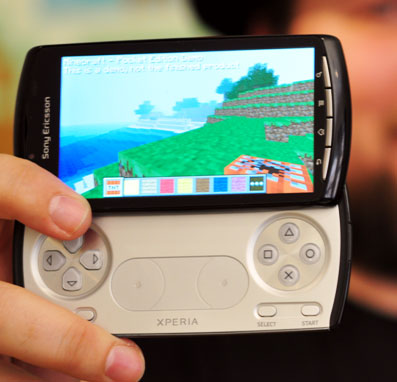 Today Sony Ericsson announced that they’re going to deliver more than 20 new games to the Xperia PLAY, including 10 exclusive titles optimized for the device itself which everyone else without the Xperia can gawk over. The new games will add to the more than 60 titles already available for Xperia PLAY, which of course will be showcased at the E3 games expo from June 7-9.  The latest build of Android powers the first ever PlayStation smartphone.  Xperia PLAY is currently available on the Verizon Wireless Network in the US and on Rogers in Canada.

The new titles will include massive multi-player online titles (MMO) like Pocket Legends, the world’s largest mobile 3D MMO, and the soon to be launched sci-fi MMO, Star Legends, which is also from Spacetime Studios. Sony Ericsson revealed that Minecraft, the indie PC game from Swedish developer Mojang, will go mobile on the Xperia Play. One of the most popular indie PC games of all time, Minecraft involves building constructions out of textured cubes in a 3D world.

“As Xperia™ PLAY becomes available to Verizon Wireless customers in the U.S., the portfolio of great games continues to grow and we are delighted to announce 20 new games optimized for Xperia PLAY,” said Steve Walker, Head of Marketing at Sony Ericsson. “By building on the open Android ecosystem, we’re providing a brilliant opportunity for developers and game publishers to bring their best titles to new audiences and fantastic new experiences for Xperia PLAY owners. Keep watching this space.”

Sony Ericsson also confirmed that new games from their stable of classic PlayStation 1 titles will be coming to Xperia PLAY shortly.  Sony Ericsson will also be supporting new developers with an initiative called “stand out from the crowd” that draws in developers who are struggling to find an audience in the sea of thousands of apps to develop a game for Xperia PLAY.
The new games announced today will be released in the coming months. We’ll keep you posted.