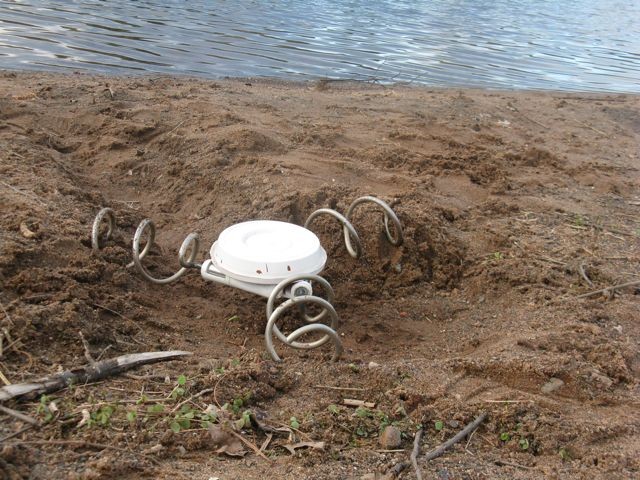 Rovers are key to exploring planets that are too far and expensive for manned missions, but they have their limitations. NASA rover “Spirit” scaled a mountain the height of the Statute of Liberty, but couldn’t maneuver its way out of a sand bog. In 2009 Spirit became stuck and in NASA controllers’ attempts to free the rover, the wheels only sank deeper. Lack of sun in the rover’s current location meant Spirit went into low-power hibernation mode, and on May 25 2011 NASA made their last communication with Spirit.

It’s tough for rovers to navigate uneven ground and they can face difficulty getting out of a trap. Wheels are not suited for all terrains, and even a robot that is built similar to a tank with tracks will not be able to move in all directions. But a new concept from an engineer in Wisconsin could give rise to a new generation of robotic rovers suited to rough terrains. Tim Lexen designed and built a radio-controlled rover prototype that rides around on helical coils, or screws, parallel to the ground. An “ultra-simple omnidirectional, holonomic rover for outdoor terrains.” The rover has a triangular body 18 cm on a side, capped by a round lid, and three stainless steel coils 20 cm in diameter and 40 cm long. Each coil is turned by a motor, and by activating a coil, the robot can move in the direction of the coil’s axis. For now, the prototype needs a human controller to steer it, but Lexen plans to add motion sensors so that the robot can steer itself.

The screws incorporate a low-friction outer coating that keeps them from getting stuck against rough surfaces while being able to push or pull against those surfaces to move the rover in any desired direction. It works well on grass, sand, gravel and other outdoor surfaces, but has trouble gaining traction on surfaces like polished wood floors.

The Y-layout and rounded edges of the screws on Lexen’s rover allows for complete omnidirectional drive, which means it can move in any direction without having to turn to face that direction itself. According to Lexen, the design would be well suited for outdoor rover applications requiring high maneuverability, robustness, reliability, and resistance to getting stuck or trapped. Which would definately have come in handy for the long lost Spirit.