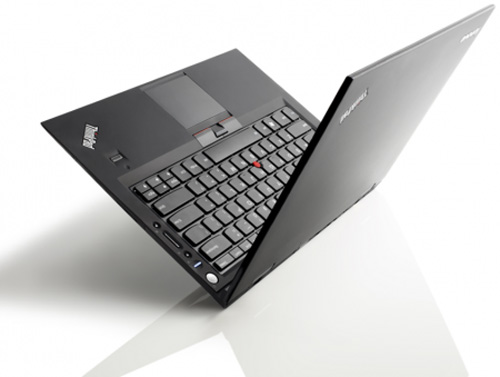 When you think about crossover vehicles, they typically fit somewhere between a standard sedan and a larger SUV. With the recent leak of the ThinkPad X1 from Lenovo, we find a notebook PC that’s try to straddle between the consumer and business markets.

Does that really work? Well, the average business user probably still enjoys some consumer-friendly features. With the ThinkPad X1, you get that corporate black styling that we’ve come to expect from the ThinkPad line, along with an encrypted hard drive, hardware-based password manager, and fingerprint reader.

But on the consumer side, you also get Dolby audio, a super thin profile that rivals the MacBook Air, HDMI output, and backlit keyboard. You can configure the X1 with a range of Core i5/i7 processors, along with Windows 7 Professional, a USB 3.0 port, DisplayPort, a single RAM slot with support up to 8GB, and a 160GB SSD. As is the case with competitors like the Samsung Series 9, there is no optical drive here.

When you walk into a business environment, you can’t exactly do it with a cherry red laptop. That just won’t demand the same kind of serious respect that a regular black ThinkPad can demand. That said, the X1 offers a slim and svelte package (along with a button-less trackpad and that signature red nub of a TrackPoint) that shows you’ve got style too. Prices start at $1,399 and go up with your upgrades.