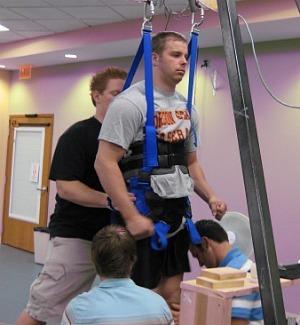 Rob Summers, 25, was paralyzed below the chest in a hit-and-run accident in 2006. Summers, a baseball player at the time, was told he may never walk again. But now, after receiving a spinal implant that stimulates neurons using electrodes, Summers can stand up while using bars for support and bear his own weight for up to four minutes.

The breakthrough was a result of a collaboration by neuroscientists at the University of Louisville, University of California, Los Angeles and the California Institute of Technology. Before receiving the spinal implant, known as an epidural stimulating array, Summers underwent two years of training on a treadmill with a harness supporting his weight and researchers moving his legs. The training did not improve Summers’ paralysis. However, after receiving the spinal implant and a few weeks of training, Summers could stand up using his own leg muscles. With the aid of a harness support and some therapist assistance, he could make stepping motions on a treadmill. Summers was eventually able to voluntarily move his toes, ankles, knees and hips on command.

Unfortunately, Summers had no voluntary control over his limbs when the electrical stimulation was turned off. However, if the effect could be replicated in further studies, individuals with spinal-cord injuries could potentially use a portable stimulation unit equipped with a walker, and stand independently, maintain balance and even take some steps. It should be noted the Summers had some sensation in his lower extremities after his injury, which means that the spinal cord was not completely severed, which may have affected the success of his recovery.

The Food and Drug Administration gave the research team approval to test five spinal-cord injury patients to see if the findings can be replicated. In subsequent trials, patients who experience no sensation will be implanted with the device, to see if this influences the outcome. The research was funded by the National Institutes of Health with additional support provided by the Christopher and Dana Reeve Foundation.