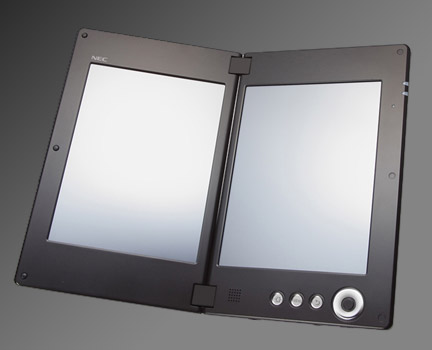 A rose by any other name? NEC showed off its LT-W Cloud Communicator a few months ago at CES and now the dual-screen Android tablet is re-emerging with a new name. Behold the NEC LifeTouch W Tablet. The Acer Iconia is the only dual screen tablet in town.

Aside from swapping out the name, NEC doesn’t appear to have changed very much with this since we saw it in January. There are two seven-inch 800×600 displays, but they are sadly both of the resistive touchscreen variety. I guess you need the precision of a stylus to write certain Japanese characters, but capacitive really should be expected in this day and age.

The other big downer? There’s absolutely no mention of any Honeycomb action for this poor tablet, getting stuck with a stretched out version of Android 2.2 Froyo. It also doesn’t help that there’s only 384MB of RAM and a mere five hours of battery life. A Cortex A8 processor runs the show, but they’re not talking about clock speeds.

I don’t mind the idea of a tablet with two touchscreens, since it’s almost like a netbook without a physical keyboard, but the NEC LifeTouch W isn’t really the way to go about doing it. Look at the size of those bezels too! In any case, it’s set to ship to Japanese retailers next month.