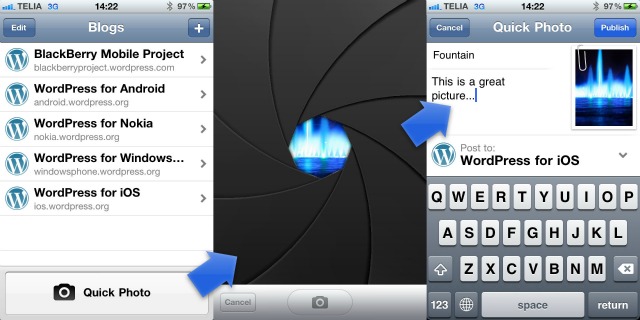 Mobile Magazine runs on a customized WordPress CMS. Several months ago I gave the WordPress iOS app a go to see if I could actually create articles and manage some of the sites workflow through it, well, it was a huge fail. Not only would it crash, but the admin panel wouldn’t load. Apparently I wasn’t the only one, as Automattic, the makers of the WordPress iOS app, have fixed 31 bugs that caused 75% of app crashes and have now re-released version 2.8 of the app to the iTunes app store.

According to the developer notes, this also may be the last version to support older iOS 3.x devices “so if you are still using an old iPhone make sure you keep a copy of the app.” I think that’s pretty nice of them to let everyone know.

Aside from the bug fixes, there are two new features that come in to play; Stats and Quick Photo. Stats give you your daily, weekly and monthly pageviews, along with referrers and post views. Jetpack – the new WordPress Stats plugin – is required if you’re on a self-hosted blog. Quick Photo lets you snap a photo, write a post, and publish it. Mashable says it’s similar to the PicPosterous, Posterous’s rapid blogging iPhone app. Apparently this is only available for the iPhone.

Support for 10 languages, including Croatian, Dutch, French, German, Hebrew, Italian, Japanese, Portuguese, Spanish and Swedish have been added. Sounds like an awesome job by the Automattic team. Grab it free if you’re a WordPress publisher from the iTunes store.