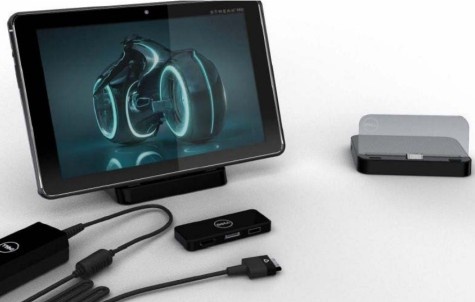 Looks like Dell is really ready to embrace this whole Android tablet thing. They already have the 5-inch Dell Stream megaphone and we already know about the 7-inch Streak. Now, we’re getting a pretty good look at another member of the family: the 10-inch Dell Streak Pro.

If this holds up to be true, and we don’t really see any reason why it wouldn’t, Dell would then be better positioned to compete against all the other 10-inch (ish) tablets on the market like the Motorola Xoom, the upcoming Galaxy Tab 10.1, and even the iPad 2. By going with 5, 7, and 10-inch variants, they’re really trying to offer a size for every taste.

In terms of specs, it should come as little surprise that the Streak Pro will be running some build of Honeycomb, though it will likely have a modified version of the Dell Stage UI in there too. We’re hearing of the standard 1GHz Tegra2 processor and 1GB of RAM.

Along with the 5MP rear cam, 2MP front cam, and dual microphones, we’re also hearing that it’ll support AT&T’s 4G LTE. They’re also doing the usual storage configurations with your choice of 16GB, 32GB, or 64GB. Not surprisingly, they’ll have a bunch of accessories to sell you too.  Expect it this June.