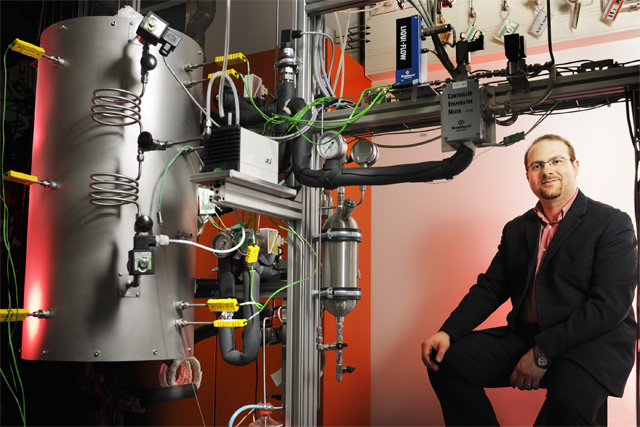 With the recent news of Toyota opening a hydrogen fuel gas pipeline-fed fueling station for recharging fuel cell hybrid vehicles by 2015, it appears that hydrogen fuel may soon be a viable alternative. However, the technology to produce it must overcome a few barriers first. While hydrogen is lightweight, energy dense and only releases water upon combustion, hydrogen produced from natural gas results in huge CO2 emissions. Not to mention that the steam reforming process is highly energy intensive, and operates at temperatures of 850 C. Now, Researcher Mohamed Halabi at the University of Technology in the Netherlands has found a way to produce high purity hydrogen from natural gas at much lower temperatures, and without releasing C02 into the atmosphere. The method is called sorption enhanced catalytic reforming of methane, and uses novel catalyst/sorbent materials. With the new method, hydrogen is produced at much lower temperatures of 400 to 500 C.

The process is performed in a packed bed reactor using a Rhodium-based catalyst and a Hydrotalcite-based sorbent as a new system of materials. Hydrogen is produced on the active catalyst and the cogenerated C02 is effectively adsorbed on the sorbent, therefore preventing any emissions being released into the atmosphere. Additionally, the direct production of high purity hydrogen is achieved at lower pressures, and with a lower level of carbon oxides impurities at less than 100 ppm.

The reduction of the reactor size, material loading, catalyst/sorbent ratio, and energy requirements are key for the success of viable hydrogen fuel. Using this method, hydrogen could be produced using smaller hydrogen generation plants for residential or industrial application, eliminating the need for large and expensive refineries. The method is still experimental at this point, but it shows promise for a future hydrogen fuel market.