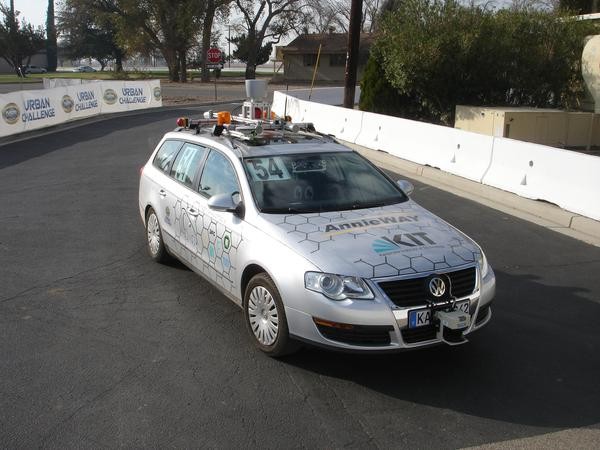 The biggest inefficiency that you’ll find on the highway has to do with the acceleration and deceleration of the cars around you. This creates all these empty pockets of road and it has a weird domino effect on traffic. Cooperative adaptive cruise control (CACC) is supposed to fix that. And that technology is precisely the focus of the Grand Cooperative Driving Challenge (GCDC) that took place over the weekend. Eleven teams from nine different countries took part with their own CACC-equipped vehicles. The cars “talk” to one another through an obstacle course, staying as close together as possible to reduce wind resistance and increase the number of cars that can fit on the same stretch of road.

The first Grand Cooperative Driving Challenge (GCDC) on Sunday 15 May was won by the German team AnnieWay of the Karlsruhe Institute of Technology. During the Cooperative Driving Weekend, part of Automotive Week 2011, it had the best cooperative driving result in an exciting international challenge against ten other teams. “Both the partners involved – High Tech Automotive Campus, TNO, Province of Noord-Brabant, SRE and Helmond municipality – and the participating teams were very enthusiastic about how this GCDC went.

They use wireless communications, along with cameras and GPS, to get the job done. By communicating with one another, they can be as efficient as possible. This is quite different from conventional adaptive cruise control, where each car is independently monitoring the other cars. Here, they’re working as a team.

We’ve seen visions of cars driving bumper-to-bumper down the Interstate thanks to tech like this, reducing the need for any sudden braking or acceleration. Whether or not these really are the cars of the future remains to be seen, but for CACC to really work, every car on the road has to be on board.