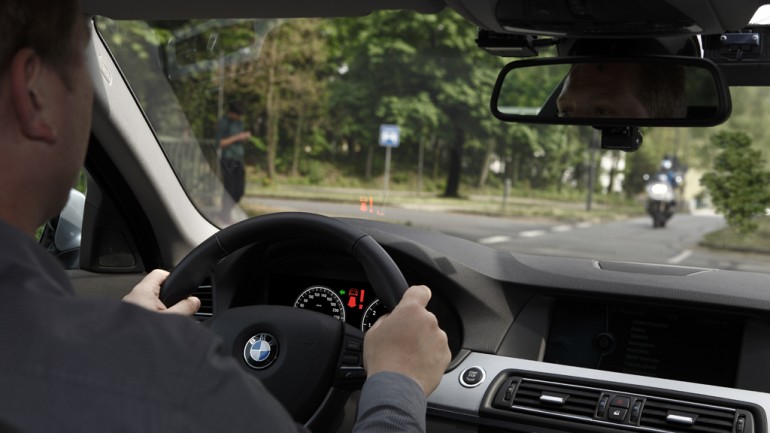 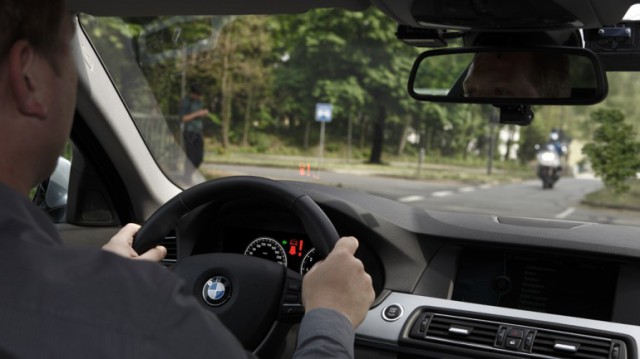 Turning left at intersections is often dangerous due to crossing two lanes of opposing traffic, poor visibility and busy intersections. BMW hopes to lower the rate of collisions with their left turn assistant system. The system combines camera, laser and vehicle-to-vehicle communication technologies in an effort to make left turns safer. It detects that the driver intends to turn left using navigation that can fix the car’s location to within a meter at an intersection, and the use of a mono camera that detects turn-off lane markings and lane borders on the road. BMW is also looking at ways for the system to be activated when the driver hits the vehicle’s left turn signal.

The system utilizes three laser scanners in the front end of the car, which quickly map the area up to 100 meters ahead. If the system detects oncoming vehicles, and the driver continues to move into the intersection, the system will sound a warning and automatically activate the brakes to prevent a collision. The left turn assistant is being tested on a BMW 5 Series demonstrator. To ensure the system doesn’t slam on the brakes when the vehicle is traveling at high speeds, the system will only apply the brakes if the vehicle is moving at less than 10 km/h. To override the system’s braking input, the driver needs to tap the brake themselves and the brake is released.

Additionally, the left turn assistant can be enhanced through the use of vehicle-to-vehicle communication systems, such as its WLAN car-to-x communication unit. These allow the vehicles to exchange information, including position, speed, current steering angle and whether the turn indicators are activated. However, both vehicles would have to be equipped with the WLAN device for the system to work, and it’s not likely every driver you come across will own a luxury vehicle.

There are several instances where this type of system could fail or prove inadequate. What happens in busy intersections during rush hour, where there is rarely a break in traffic to turn left, and often the chance only comes during a yellow light before it turns to red? Cars would certainly be closer than 100 meters to the BMW, so would the system stop you from going through and keep you stuck in the middle of the intersection? Supposedly, the driver would be able to tap the brake and then continue to move forward, but there would be a lag, which would prove dangerous during the few seconds of turning left during a yellow light. As well, the system recognizes cars, trucks and motorcycles, but what about bicycles and pedestrians?

BMW will premiere the left turn assistant at the Intersafe 2 Final Event on May 17 and 18 in Wolfsburg, Germany.