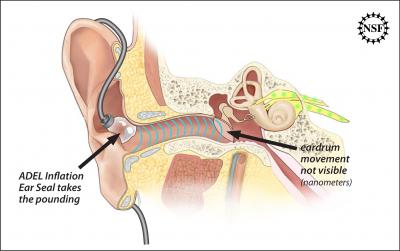 Now, a group of sound engineers at Asius Technologies of Longmont, Colorado, may have found a way to prevent listener’s fatigue. The research was led by musician and audio engineer Stephen Ambrose, who has worked for more than 35 years to develop in-ear monitors, devices worn by performers and producers allowing them to hear the music rather than ambient noise.

The team found that listener fatigue happened even when the volume was turned down, which prompted research into physiological causes. Using physical and computational simulations, the researchers suggested that when sound waves enter an ear canal that is sealed from outside sounds by an earbud, an oscillating pressure chamber is created inside the eardrum. The pressure chamber can produce a dramatic boost in sound pressure levels, which triggers an acoustic reflex. The reflex is a defense mechanism in the ear that dampens the transfer of sound energy from the eardrum to the cochlea by as much as 50 decibels, or approximately the volume of a normal conversation.

The acoustic reflex does not stop the pressure oscillations in the eardrum, but instead makes loud volumes seem lower than they really are, which can cause the listener to turn up the volume. The poor ear drum, which has already been shaken by the oscillations of the pressure chamber, is then bombarded with an even greater volume. The tiny muscles involved in the acoustic reflex are activated once again, and the repeated engagement and disengagement of those muscles leads to the pain and discomfort known as listener fatigue.

The researchers presented two solutions to the problem at the 130th Audio Engineering Society convention in London. The first is a retrofit that can be applied to existing in-ear headphones, in which a thin film of polymer is stretched over a pressure-alleviating hole, providing a sacrificial membrane to absorb the pressures that build up in the eardrum. The second approach is a small, inflatable seal that inflates the polymer membrane, which then acts like a second ear drum, directing excess sound energy away from the sensitive structures of the ear.

By stopping the acoustic reflex from triggering, it could help people select lower, safer listening volumes. The tiny muscles involved in the acoustic reflex are no longer being tired out from overuse. The researchers hope the devices will help everyone from musicians to hearing-aid wearers.